Time is up for corporate corruption in international trade 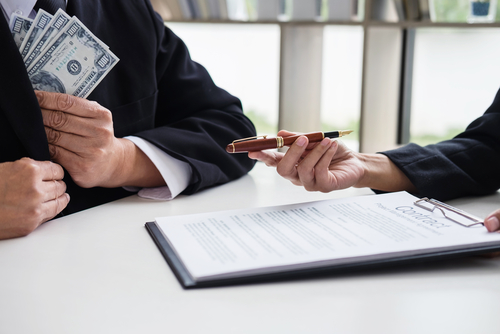 EU member states are lagging behind their own commitments to fight bribery, reports Transparency International; however, amid a financial crisis, an anti-corruption drive has become urgent.

Thessaloniki (Brussels Morning) Would a state prosecute its nationals for employing corrupt practices in their business abroad? A Transparency International 2020 Report “Exporting Corruption” report, says probably not, if they’re expatriating their coffers back home.

Reporting of bribery overseas has, over time, exposed the multi-country graft enabling companies to secure major contracts in foreign markets detrimental to those living there. In Colombia, the Superintendency of Corporations imposed a 5 billion pesos (1.8 million dollars) fine in 2018, on water conglomerate Inassa over charges of foreign bribery in Ecuador in 2016. The Airbus case of 2020 was the largest foreign bribery settlement of all time, as Airbus, a global provider of civilian and military aircraft headquartered in France, settled foreign bribery cases in France, the UK and the US for a cumulative sum of 4 billion dollars.

However, more than 20 years after the conclusion of the OECD Anti-Bribery Convention, signatory states have a long way to go before they meet the legal benchmarks set. Signatories have yet to assume responsibility for undermining good governance, misdirecting public resources, distorting cross-border investment, deterring fair competition in international trade and the discrimination against small and medium-sized enterprises that bribery affects. In other words, corruption in international business slows down economic and social development.

The key finding of the 2020 Transparency International Report is that “active enforcement” has significantly decreased, while “moderate enforcement” has more than doubled. The report points to persistent secrecy over corporate beneficial ownership, which hinders enforcement, while noting that compensation for the victims of corruption is rare. Rather, most confiscated foreign bribery proceeds end up in the treasuries of the countries exporting corruption.

EU member states score no exception to this overall trend. Austria, Denmark, Greece, Lithuania, Slovenia, Estonia and Latvia barely meet the “limited enforcement” benchmark used in the report. Ireland, Belgium, Poland, Czech Republic, Luxembourg, Hungary, Finland, Slovakia and Bulgaria also fall below the standard of “limited or no enforcement”. That poor performance is a stain on the effectiveness of Eurojust, the agency that for two decades has coordinated transnational investigation and prosecution of transborder crime in the EU.

The COVID-19 pandemic has rendered the situation more serious, as cross-border corruption in the healthcare sector increases, resulting in casualties. However, the risk of pandemic-related corruption goes beyond the health sector. As corporate profits shrink, the temptation to win business in foreign markets at any cost grows, with corrupt procurement deals wasting scarce public resources. Since the signature of the 1997 Anti-Bribery Convention, there has never been a time when “active” foreign bribery enforcement has been more crucial to public confidence.

Transparency International biannual reports are an independent assessment of how the OECD Anti-Bribery Convention is implemented. The 2020 report is the 13th edition of its kind, holding 43 signatory states to account, ensuring that they uphold their commitment to criminalising bribery of foreign public officials, introducing both preventive and combat measures.

Beyond addressing the identified shortcomings, the 2020 Report points to the need for higher standards of convention reporting and enforcement, expanding the scope of the OECD Working Group on Bribery annual report to include a publicly accessible database that would include law enforcement and judicial data, including reports on out-of-court settlements.

At an EU level there are positive milestone developments, including the ongoing transposition of the EU Directive on Whistleblower Protection and the creation of the office of the European Public Prosecutor. These institutional developments give the EU enhanced capacity to investigate and prosecute crimes against the EU budget in EU member states, contributing to the effectiveness of prosecuting transnational bribery.

What is mostly required, though, is political will by the EU member states: the EU’s fourth Anti-Money Laundering Directive requires all of the bloc to create a central register for EU-based companies, accessible to competent authorities and public stakeholders with a legitimate interest. The deadline for transposition of the Directive into national law was June 2017. As of June 2020, infringement procedures were pending against 13 EU member states, both due to delayed and incomplete transposition of EU legislation. The EU’s 5th Anti-Money Laundering Directive further expanded the scope of previous registry obligations, widening the list of those deemed to have legitimate access to the register. With a transposition deadline of January 2020, not all member states have yet complied. The clock is ticking.