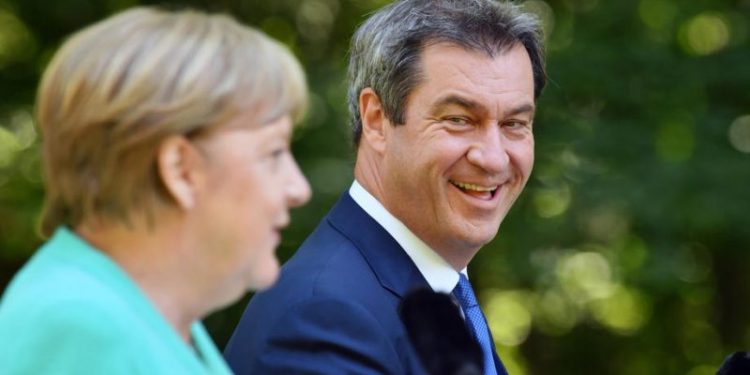 Berlin (Brussels Morning) According to opinion polls, German conservative voters would prefer Bavarian Premier Markus Söder as the successor to Germany’s Chancellor, Angela Merkel, when she steps down after federal elections in September, dpa reports.

Traditionally, most candidates for Chancellor, just like Merkel , come from the larger Christian Democratic Union (CDU), while its Bavarian sister-party, the Christian-Social Union (CSU),  rarely fields a jointly backed candidate.

But the tradition could be forced to take a step back as most polls show CDU voters would prefer CSU leader Söder over Armin Laschet, Merkel’s successor as the leader of the CDU. According to a Forsa poll released on Thursday, up to 68% of CDU voters would back Schöder as the two parties’ joint candidate for new chancellor. Only 21% would prefer their own party leader Laschet, while 11% remain undecided.

The CDU and CSU leaders are set to meet sometime between the end of Easter and late May to determine a joint candidate for the position of chancellor. With recent scandals shaking both parties, plus two record losses in regional elections, the two parties might find it to be in their interests to arrive at a decision sooner.

The two parties currently find themselves a mere three percentage points ahead of the fast-growing Greens, a party fast becoming the most likely kingmakers in September, since no other party appears to be in a position to form a government without their support.