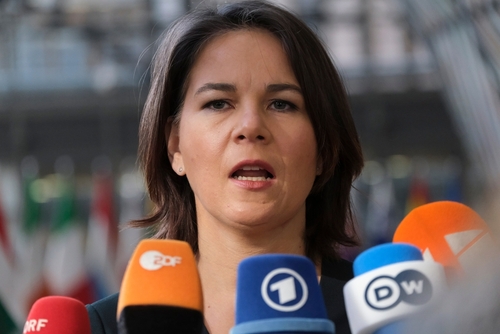 German Foreign Minister Annalena Baerbock makes a statement as he arrives for a Foreign Affairs Council (FAC) meeting at the EU headquarters in Brussels, Belgium on March 21, 2022.

Speaking before the tour, she promised to provide more support to Baltic countries and added that Germany is prepared to play a more important role in the security of Estonia, Latvia and Lithuania, DW reports.

Noting that all three countries are EU and NATO members, Baerbock stressed “if necessary, we will defend every square centimetre of territory of our joint alliance.”

She pointed out that Germany “has already taken on a leading role among NATO’s present in Lithuania” and reiterated that the country is prepared to do more for security of its partners.

As part of her tour, Baerbock is to attend meetings with leaders of Baltic countries to discuss reactions to the war in Ukraine.

She is to attend a meeting with Latvian Minister of Foreign Affairs Edgars Rinkēvičs later on Wednesday, after which she is to meet with Latvian Prime Minister Krišjānis Kariņš.

Baerbock will visit Estonia on Thursday and attend meetings with her Estonian counterpart Eva-Maria Liimets and Prime Minister of Estonia Kaja Kallas.

She is to visit Lithuania on Friday to attend meetings with Lithuanian Minister of Foreign Affairs Gabrielius Landsbergis and Lithuanian President Gitanas Nausėda in Vilnius.

“We can learn a lot from Latvia, Estonia and Lithuania about defence,” Baerbock pointed out and noted “the Baltic states have been investing in securing their energy supply, IT infrastructure, the resilience of their media landscape and their defensive capabilities for years.”

She added that the three countries have been keeping a close eye on Russia and its plans for years and concluded “I would like to listen to their experiences and insights.”

Baltic countries have significant populations of ethnic Russians as former Soviet republics and have expressed concerns that Moscow could use this as an excuse for strengthening Russian influence.

Russia attacked Ukraine in February and described the move as a special military operation, with Western countries describing it as an unprovoked attack. Ukraine and the West have accused Russia of committing war crimes in the Kiev region, which Moscow rejects.