Did the West abandon Ukraine? 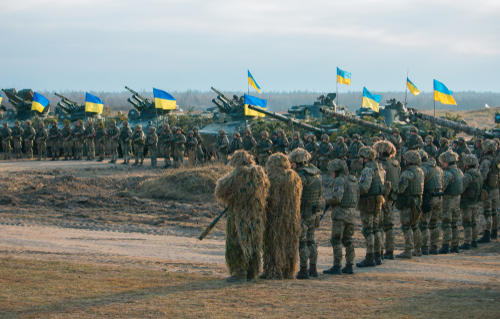 Greece (Brussels Morning Newspaper)  In an emotional and aggrieved address to the Russian people, President Vladimir V. Putin ordered troops into two Russia-backed separatist territories in Ukraine, hinted at a wider military campaign, and claimed all of Ukraine as a country “created by Russia”.

The decision to send troops to perform “peacekeeping duties” will be interpreted as an occupation of the region in Ukraine as well as by its Western allies, and will almost certainly result in wider sanctions and a Ukrainian military response.

Russia’s Foreign Minister, Sergey Lavrov, stated on Russian television Tuesday that the reaction of Western powers to Moscow’s recognition of the Donetsk and Lugansk People’s Republics was “predictable”.

“The reaction is well known, of course, and everyone, probably is talking about it now; TV screens, other media, the Internet, social media are overflowing with it. The reaction was expected”, he said.

Biden is viewed as a weak president in Russia, and Kremlin officials perceive his lack of leadership as an opportunity to take action. He has now verified their point of view. Bringing in a few extra troops is more akin to an alibi, than a programme. Because the West needed to appear to be doing something to maintain its moral sanctity, it made a symbolic gesture in the hopes of resuming its emphasis on domestic issues. Biden has mentioned nothing about whether the deployments in Poland and Romania will be permanent. As a result, the US response will do nothing to help Ukraine or to ensure Poland’s security.

“I condemn Russia’s decision to extend recognition to the self-proclaimed ‘Donetsk People’s Republic’ and ‘Luhansk People’s Republic’. This further undermines Ukraine’s sovereignty and territorial integrity, erodes efforts towards a resolution of the conflict, and violates the Minsk Agreements, to which Russia is a party”, NATO’s Secretary-General Jens Stoltenberg stated.

NATO may support the sovereignty and territorial integrity of Ukraine within its internationally recognised borders, but not all of the allies share the same eagerness to confront Moscow. Biden has acknowledged that NATO members are divided as to how severe additional sanctions against Moscow should be. Apart from that, In the possible event of a Russian invasion, the alliance’s response will be to deploy more troops in Poland and Romania. But nothing on Ukrainian soil, so no further support, just rescheduling and monitoring.

The United States and NATO have chosen not to understand or, more likely, to ignore Putin‘s motivations, goals, and viable exit strategies, possibly because they are “revisionist” and thus unacceptable interpretations of history. The problem is that Ukraine, a country of 44 million people, is facing a humanitarian crisis amid the sound of war drums.

Brussels Morning discussed aspects of the crisis with A.V., a member of the Ukranian diaspora, based in Italy, and D.Y., a local from the Sumi Region, Eastern Ukraine. (Note: in both instances, at the request of those interviewed, we are using initials out of respect for their concern for their well-being and that of family members in Ukraine).

A.V. : “I visited my mother back in Kiev two weeks ago, and urged her to leave the country with me. She is the only family I have back home, and I worry about her a lot. In case of a crisis, she won’t be able to leave the country. All those that will be left back, will not be able to receive any help from the diaspora. They will face extreme poverty and undispeakable conditions. There are already people that live in extreme poverty, I do not believe that they will survive in case of war.”

D.Y. : “Here in Sumy region people are literally staying locked in their houses, afraid of any possible invasion. We do not wish for war, but I can see people gathering in houses and discussing how they can prevent civilian losses and also resist. Some are discussing to leave for the West, before It is too late and a state of war emergency is declared.”

A month ago, Russia’s military activities were mostly focused on keeping Ukrainians demoralised and anxious as a result of the looming threat of further distabilisation. Russia feeds the irritation and animosity that it believes Ukrainians will eventually direct at their own politicians by maintaining the war at a low boil.

This rage had led to allegations that Ukrainian leaders, for example, are not interested in resolving the crisis, are profiting from it, or are exploiting it and their core voters.  As a result, the protracted conflict has wreaked havoc on the Ukrainian political scene, giving a boost to radical movements that were minor or even antagonistic to the country’s political elite.  Russia already achieved its propaganda aim by having all the media state that it has assembled some 70% of the military capacity required for a full-scale invasion. US officials, speaking anonymously,  publicly share that the Russians are a breath away from Kiev, and that they anticipate 50,000 civilian deaths and a well nigh certain humanitarian crisis.

This week, Ukraine’s President Volodymyr Zelensky addressed his nation saying: “we don’t owe anything to anyone, and we will not give away anything to anyone”, his response to Russia’s recent actions. The truth is little can be done, since Moscow has surrounded Ukraine with troops that it has stationed in Crimea, East Ukraine, Transnistria, and Belarus. The West has evacuated the country, moving troops and diplomatic personnel to Romania and Poland.

Moscow continues to insist that Ukraine should not be allowed to join NATO and is bound to keep working to the same political agenda, using all the strategic means necessary before even attempting to “march to Kiev”.