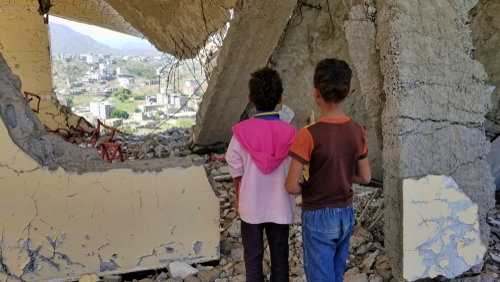 Brussels (Brussels Morning) The European Commission has announced 95 million euros in humanitarian support to help address the dire situation of the people of Yemen, who, since 2014, have been enduring a relentlessly brutal war.

The Commissioner for Crisis Management, Janez Lenarčič, announced the new funding yesterday at a high-level pledging conference for Yemen. The humanitarian situation is causing record levels of child malnutrition, with the imminent threat of famine and renewed fighting looming, according to local reports.

Current estimates indicate that more than 2 million children as well as over 1 million pregnant women and mothers are expected to suffer from acute malnutrition in 2021, according to the Commission.

Lenarčič said the EU funding is essential to help maintain life-saving aid for millions of people, exhausted after a disastrous year marked by fighting, COVID-19 and further economic collapse.

“The EU does not forget the dire situation of people in Yemen who are once again on the brink of famine after bearing the brunt of the world’s worst humanitarian crisis. Parties to the conflict need to facilitate the access of humanitarian organisations to those most in need and avoid further civilian suffering”, Lenarcic declared.

In a recent debate, MEPs stressed how nearly 80% of Yemenites — more than 24 million people —  are in need of humanitarian support, while 50,000 people are living in famine-like conditions, a figure expected to triple by mid-2021.

The United Nations has also pledged financial support for Yemen. However, UN Secretary-General António Guterres said that a “disappointing” 1.7 billion dollars had been pledged for humanitarian aid in in 2021, falling far behind the 3.85 billion dollars the UN had sought.

“Cutting aid is a death sentence”, Guterres warned on Monday.

The European Parliament, in voicing its concerns about the ongoing violence in Yemen, has described the situation there as having degenerated into the world’s worst humanitarian crisis. The Parliament has specifically called for an end to the sale of arms that fuel the conflict there and it is demanding accountability for the EU countries violating arms export rules.

“It’s also part of the story that this war is being fought with weapons made in the EU”, MEP Hannah Neumann (Greens) pointed out, describing how the Eurofighter from Airbus is being used to bomb hospitals in Yemen and how French Mirage bombers are being used by the UAE “to do exactly the same”.

“Both airplanes are equipped with MK80 bombs manufactured by RWM, the Italian subsidiary of German Rheinmetall. The French DCI company is at the moment training Saudi soldiers on how to better launch rockets into Yemen”, Neumann continued.

MEPs argue that there can be no military solution to the conflict and that the crisis can only be resolved sustainably through an inclusive,Yemeni-led and Yemeni-owned negotiation process.

“We know little about the people of Yemen. We know that western powers have supported a Saudi and UAE attempt to bomb them into submission, in efforts to impose neoliberalism on Yemen”, MEP Mick Wallace (GUE/NGL) said. He urged his colleagues to read the novel “The Hostage” to find a “brief insight into these amazing people”.

In the meantime, the Commission pledged to maintain its continued humanitarian support for the people of the war-torn country by providing food, nutrition and healthcare, financial assistance, water and sanitation, education and other lifesaving measures for the conflict-displaced and those in most need.