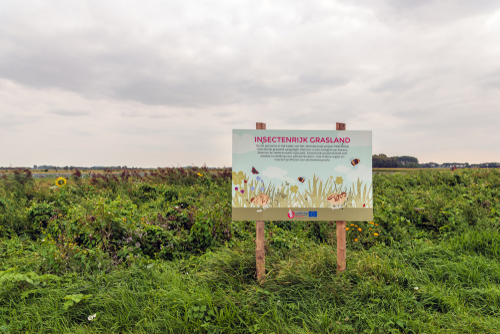 SLEEUWIJK, NETHERLANDS - AUGUST 28, 2018: Information board regarding insect-rich grassland sown with subsidy from the European Union EU for the conservation of partridges and other birds.

Belgium, (Brussels Morning Newspaper) The EU Council has adopted a position on biodiversity in preparation for the UN Biodiversity Conference in Montreal slated for next month.

In a statement released on Monday, the Council pointed out that attendants of the conference plan to adopt a global biodiversity framework that will guide actions with the aim of environmental protection.

“This will be a breakthrough conference… world leaders will gather to agree on the global protection of our biodiversity,” noted Anna Hubáčková, Czech Minister of the Environment.

She stressed the importance of taking action, pointing out that species are dying out and adding that she is happy to see that the EU adopted a tough stance. “Protecting our ecosystems is a common obligation for us as humanity,” she concluded.

The Council called for a comprehensive, transformative and ambitious framework with medium- and long-term goals up to 2030 and 2050, respectively, to address direct and indirect causes of loss of biodiversity.

According to the EU Council, 2030 goals have to include conservation of at least 30% of land and oceans, and restoration of 6 billion hectares of land, freshwater and ocean ecosystems.

In addition, the Council calls for elimination of unsafe and unsustainable farming, stopping human-caused extinctions of threatened species and cutting pollution levels from all sources.

The Council reminded that the European Commission announced plans to double financing of external biodiversity programmes with a focus on underdeveloped countries and noted that the bloc is already the largest contributor to such efforts.

It called for the adoption of mechanisms for planning, monitoring, reporting and reviewing efforts aimed at protection of biodiversity. The Council stressed that biodiversity bust be taken into consideration in all EU policies and plans at local, national and bloc level.

“The objectives of the Convention on Biological Diversity are the conservation and sustainable use of biodiversity and the fair and equitable sharing of the benefits arising out of the utilisation of genetic resources,” the Council pointed out in the statement.

The body stressed that policies and plans also have to support sustainable development goals.