Tested: more than half do not wear a mouth mask on public transport 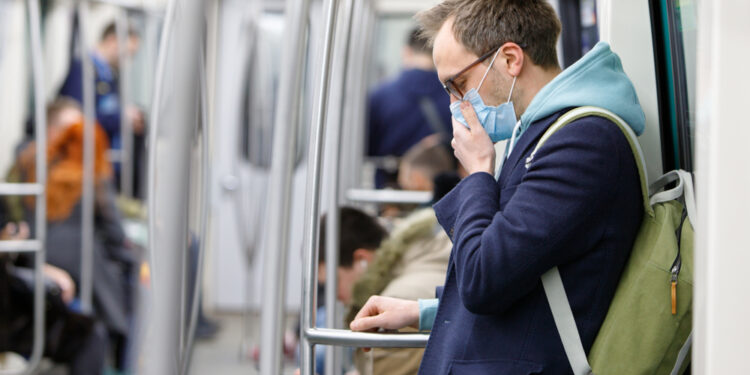 Brussels, (Brussels Morning) – The mouth mask is increasingly disappearing from the streets, and the obligation is also increasingly becoming a dead letter on public transport. BRUZZ  did a sample on the tram. More than half of two hundred tram users did not wear a face mask.

We counted 200 passengers on the route of tram 92 between Stefania and Schaerbeek Station. 93 of them were still wearing a mouth mask. This was not the case with the other 107. However, there is still a mouth mask obligation in the vehicles.

“I didn’t know we had to wear a mouth mask,” says one of the travelers. Although the obligation is indicated and is regularly announced, several travellers without a mouth mask appear to be unaware. Other travelers indicate that “nobody is wearing it yet” and the measure would no longer be of much benefit.

According to An Van hamme, spokeswoman for the STIB transport company, the majority of travellers still wear a mouth mask and a limited sample gives a distorted picture. “Although we do notice that there are more and more travellers who do not respect the mouth mask obligation, especially because it is no longer mandatory elsewhere. Some people have forgotten it, don’t have a mask with them, or simply think it is no longer necessary or incompatible with other situations.”

The number of checks on the mouth mask obligation has not changed, says Van hamme. In April, another 67 PVs were drawn up. In March there were 81, in February 139 and in January 154. In recent months, these checks took place during ticket checks, interventions and patrols. During the peak of the pandemic, checks focused solely on face masks.

In recent weeks, various voices have been raised to abolish the mouth mask obligation on public transport. Federal Minister of Mobility Georges Gilkinet (Ecolo) already argued for this last week . According to Flemish Mobility Minister Lydia Peeters (Open VLD), this is also the position of the various Mobility Ministers of our country.

The Consultation Committee will meet on 20 May, at which the abolition of the mouth mask obligation on public transport may be on the table. Virologist Marc Van Ranst then let it be known that he is not in favor of this. “Today the virus is still circulating too much. Abolishing the mouth mask requirement everywhere would not be a good idea. But in the long run it should certainly be possible: in the summer the virus circulates less anyway.”

Van Ranst emphasised that in the event of abolition, air quality should be monitored more closely, especially on outdated buses.

Until a possible abolition, STIB will continue to focus on raising awareness and checks on the mouth mask obligation. “We still do a lot of awareness raising and checks to remind our travelers that they still have to comply with this obligation a little longer,” says Van hamme.