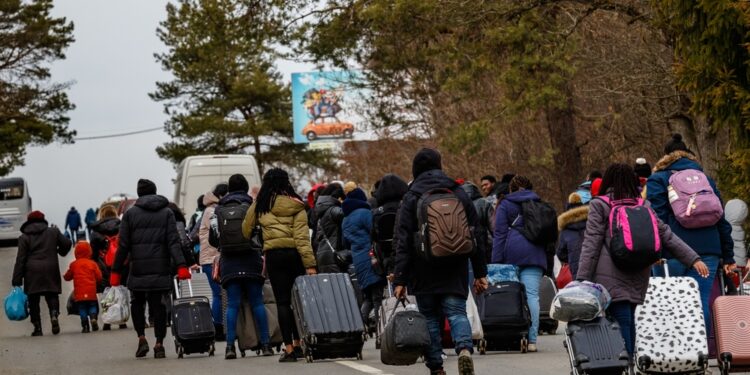 Brussels, (Brussels Morning) -There are fewer Ukrainian refugees than expected throughout Belgium. Brussels would therefore have to accommodate ‘only’ 8,000 Ukrainian refugees, 10 percent of the total. In practice there are already more today, because these refugees mainly stay in the capital region.

The federal government originally expected about 200,000 Ukrainian refugees in our country, a figure based on information from the UNHCR, the United Nations refugee agency as reported by BRUZZ. Brussels should provide 10 percent of the reception, i.e. 20,000 people

However, fewer people have been coming for quite some time now than was previously believed. There are still less than 40,000 Ukrainian refugees in all of Belgium today. The figure of 200,000 was therefore adjusted to 78,000 last week, said Brussels Prime Minister Rudi Vervoort (PS) in the Brussels parliament.

The cabinet of Federal State Secretary for Asylum and Migration Sammy Mahdi (CD&V) confirms this. “In the beginning, several scenarios were drawn up and 200,000 was the high figure,” said his spokeswoman. “Now we start from the middle scenario.”

He added that the figure in question is just theory after all. Proportionally, many more Ukrainians remain in Brussels, not 10 but about 30 percent of the total, according to the head of government. “There is a diaspora here, the distances are short and you will find all possible services. For example, Vielsalm is much less attractive.”

The adjusted figure also has consequences for the number of reception places that the Region must create. Vervoort also warned that the supply on the housing market is not sufficient for 8,000 Ukrainians. According to the head of government, that number corresponds to 5,000 to 6,000 homes.

“That is why I supported the call of the Ukraine coordinator of the Brussels government to provide 150,000 square meters of “offices, facilities and other spaces” that can be easily converted into temporary housing for Ukrainian refugees.”

The government is looking at projects that can accommodate 30 to 2,000 refugees.