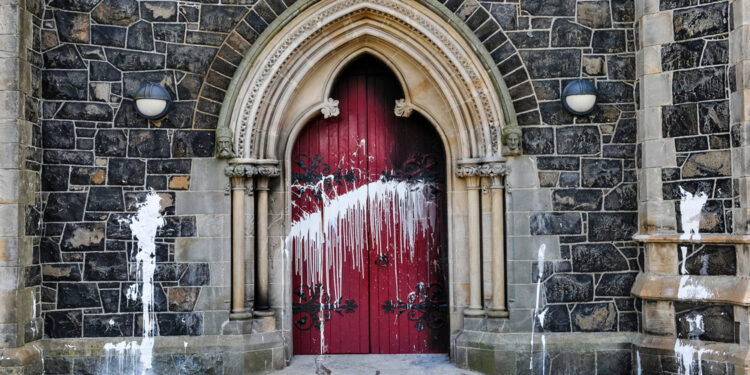 Brussels, (Brussels Morning) – Between 2019 and 2022, 53 damaged churches or chapels were found in the Brussels region, while only one mosque was the target of vandals during that period. “Church buildings in Brussels are therefore much more often the target of vandalism than mosques,” concludes Brussels Member of Parliament for Vlaams Belang, Dominiek Lootens-Stael, from figures he received from Prime Minister Rudi Vervoort (PS).

“These figures shed light on something that people prefer to be silent about: namely that part of the Brussels population abhors our cultural heritage, probably for religious reasons, and even goes so far as to put that abhorrence into action,” said senator and Brussels Vlaams Belang chairman Bob De Brabandere as reported by BRUZZ.

Vervoort’s answer to a written question from Lootens-Stael shows that 53 churches and chapels, 12 cemeteries, 2 abbeys and 1 monastery were targeted by vandals in the period 2019-2022. During the same period, only one mosque was damaged.

The reason for requesting the figures was the recent news that the iconic building, the Basilica of Koekelberg , has become the target of vandalism. “That news was picked up, but is only situated in a whole series of similar incidents and vandals that were and are reported to us,” said Lootens-Stael. “The figures I received from Vervoort only confirm what we already knew.”

It is also currently unknown whether the actions that have damaged the church buildings always stemmed from Christian hatred or other anti-Christian sentiments. Lootens-Stael will submit a new interpellation this week to obtain more information about the nature of the vandalism. In it, he will also ask what the Brussels government wants to do to better protect Christian institutions against vandalism.