Is there still a future for Marc Sleen museum? 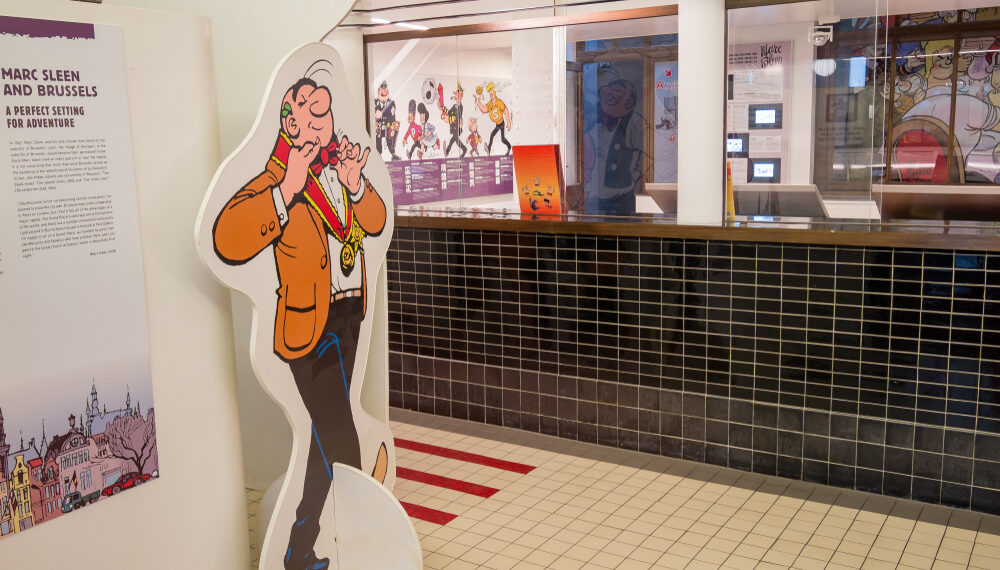 Brussels, (Brussels Morning) – Marc Sleen would have turned 100 at the end of this year and that will be celebrated in Brussels with two exhibitions and the translation into Brussels of a Nero album. It remains unclear what will happen to the Marc Sleen Museum after this festive year and whether the subsidy tap will close completely.

Comic book author Marc Sleen, who passed away in 2016, was born a hundred years ago. His most famous comic book hero Nero is 75 years old. So it was a festive year, and it was kicked off at the end of March in Ghent, Sleen’s birthplace. “Throughout the year, parties will be celebrated in various places where Marc has lived or worked, with numerous events and often a waffle maker,” says Catharina Kochuyt, widow of Sleen and chairwoman of the Marc Sleen Foundation.

This is also the case in Brussels, where Sleen settled down shortly after WWII to make his first Nero drawings for De Nieuwe Gids . That newspaper was located in Zandstraat, where the Marc Sleen Museum has also been located since 2009.

Both the Sleen Museum and the Belgian Comic Strip Centre located across the street will honour the legendary comic book author with an exhibition this year, says Kochuyt. “There will also be a translation in Brussels of De Zwartetoren .” In the eighties, Sleen made a Nero city trilogy, De Zwarte Toren is about Brussels, Boema’s bomb is about Ghent and Balderic’s De Ring is about Antwerp. All three will be translated into dialect in honour of the anniversary, with former politician and current regional language coordinator Robert Delathouwer taking care of the Brussels translation.

The larger of the two exhibitions, in the Stripcentrum, will open at the end of May and bear the title ‘100 years Marc Sleen, a century in change’. The curators are Nero and Sleen experts Yves Kerremans and Noël Slangen, also a political commentator. “Sleen started drawing in 1946 and continued to draw until 2002,” says Slangen. “That provides an extensive picture of the time, but also an image that no longer always corresponds with how we look at certain things now. We want to show how Sleen dealt with themes such as smoking, sexuality, crime, people with a migration background and the position of women, but also how other comic book authors and TV makers, for example, viewed them, and how the vision of those themes developed over the years. changed over the years.”

Slangen refers by way of example to the pipe smoking Madam Pheip from the Nero series. “In the exhibition she is compared, among other things, with Lucky Luke, for whom artist Morris replaced the cigarette with a straw after a while. We can also add the image of a vaping Kate Winslet from the recent TV series Mare of Easttown .”

Another example is the figure of Petoetje, son of a Papuan chieftain. “Here you can see a clear evolution in Sleen’s work. At his first appearance, Petoetje was still wearing a loincloth and had very plump lips, but soon he changed into normal clothes and became a full-fledged character, the predecessor of Adhemar as an inventor,” says Slangen. “At the same time, Marc Sleen remained stuck in stereotypes until the very end. We will also show that he has not evolved enough in that regard.”

The latter will probably also be reflected in the ‘Congo Comics’ exhibition, which opens at the end of June in the Marc Sleen Museum. It is about Congo and Africa, Sleen’s second great love after Nero. According to Johan Stuyck, comics publisher, teacher and coordinator of the temporary exhibitions in the Sleen Museum, it will show how Sleen depicted Africa, but also how the current generation of Africans draws themselves. “We’re not so much looking for confrontation,” he says.

The Congolese-Belgian cartoonist Barly Baruti was asked to act as curator for this exhibition. He gathered eight, mainly Congolese, comic strip authors around him, three of whom were women. “Most live in Kinshasa. They draw what concerns them there today.”