A mob boss sets the political agenda in Turkey

by İsrafil Özkan and Kürşat Özgür Özer
in Opinion 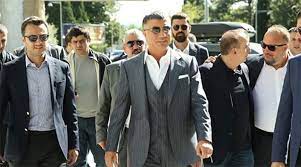 Ankara (Brussels Morning) Sedat Peker, who has had an Interpol red notice issued about him on the grounds of his being the leader of a criminal organisation, has continued to set the agenda with his YouTube broadcasts throughout the past month.

At the centre of Peker’s allegations have been Süleyman Soylu, the Minister of Interior and Erkan Yıldırım, son of the former Prime Minister Binali Yıldırım. The allegations cover a broad array of issues, such as drug trafficking, the government’s involvement in the Syrian civil war and factionalism within law enforcement.

There need to be some reservations about the extent to which it is fair to accept criticism of  the Turkish government by the unproven allegations of a convicted mob boss who fled abroad. However, it should be noted that as soon as Peker’s videos are posted on YouTube, social media users and journalists have tried to confirm the allegations via various means. Minister Soylu has certainly felt obliged to refute the allegations made against him on a TV channel. Other officials at the centre of the allegations continue to deny Peker’s claims.

Turkish civil society, especially social media users, relentlessly devour the videos published at 7.30 am every Sunday. The videos typically exceed five million views in just a few hours of their release. Although the videos had been listed on IMDB as among the most voted-on items in the world, the movie website removed this page recently.

While the representatives of the parties in parliament have been quite passive in the process and have confined their political strategy to calling for prosecutors to investigate the veracity of the allegations, reactions from the general public continue to grow at an unprecedented level with each video. While the reactions continued, former Minister of the Interior Mehmet Ağar, against whom Peker also made serious allegations, resigned from the private company he is currently working for. Moreover, journalists Hadi Özışık and Süleyman Özışık were investigated, both of whom were exposed as having had some dealings with Peker, and Süleyman Özışık’s articles in the Türkiye Newspaper were discontinued.

Among Peker’s allegations, there was a reference to one of the most painful incidents in Turkey during the 1990s. Peker claimed the government of the era was involved in the January 1993 death by a car bomb of the prominent journalist Uğur Mumcu. Perek also revealed the names of those that he claimed were responsible for the murder of the Cypriot journalist Kutlu Adalı in 1996. These allegations drew a strong reaction from non-governmental organisations and journalists, including calls for the re-investigation of these deaths.

However, the ruling AKP party and its coalition partner MHP rejected the proposal of a parliamentary commission to investigate these allegations.

The ruling party is quite disturbed by allegations of a relationship with a convicted mafia boss; the government seemed not to hesitate to organise an election campaign involving Peker in 2015 and the implicit support for apparent examples of hate speech in order to create a climate of fear. It’s crucial to note that only six months ago, the government took measures to intimidate non-governmental organisations by introducing new regulations preventing all kinds of actions and drug trafficking by groups that have material connections with armed groups within the scope of the “Law on the Prevention of the Financing of the Proliferation of Weapons of Mass Destruction”. Yet, amidst mounting political and legal pressures, Turkish civil society has still managed to stand against the government’s alleged relations with mafia figures.

We will continue to follow the consequences of these widespread demonstrations against the high-profile figures that are at the centre of both these allegations and the political life of Turkey.