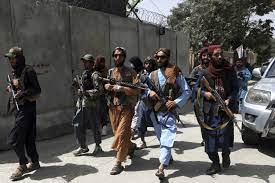 Brussels (Brussels Morning) Three people were killed at an anti-Taliban protest in Jalalabad on Wednesday, according to three witnesses, one of whom is a former police official.

Witnesses say that Taliban fighters shot at protesters when they tried to erect a flag of the Islamic Republic of Afghanistan in a square, stressing that three people were killed and more than 10 injured.

The Taliban are consolidating power, with a senior member of the jihadist group noting that the new government may be constituted as a council with Taliban Supreme Commander Hibatullah Akhundzada in charge.

Senior Taliban official Waheedullah Hashimi stressed that Afghanistan will not be a democracy.

The Taliban stressed the movement has changed in the last 20 years and added that their regime will be peaceful and respect women’s rights within the limits of Sharia law.

Senior Taliban officials announced Islamic law will not be imposed as strictly as it was during the movement’s rule in the period between 1996 and 2001.

Commenting on women’s rights, Hashimi noted that the final decision will be by a council of Islamic scholars, which will decide how women will be allowed to dress, work and receive education.

Under the previous Taliban rule guided by Islamic law, women were not allowed to work or receive an education. They were also obliged to wear burqas outdoors, among other rules.

Commenting on the Taliban’s announcements, Russia’s Permanent Representative to the UN Vasily Nebenzya noted on Wednesday “we’ll see what they do, whether it will be according to the pronouncements that they made.”

UK Prime Minister Boris Johnson pointed out that the movement will be judged “by its actions rather than by its words.” British MPs described the withdrawal of Western troops and the subsequent fall of Afghanistan as a failure of leadership, intelligence and moral duty.

Many Afghans are not convinced by the Taliban’s promises as thousands are trying to leave the country.