10 years after the Arab Spring: ‘Libya proves the EU is not a serious geopolitical actor’ 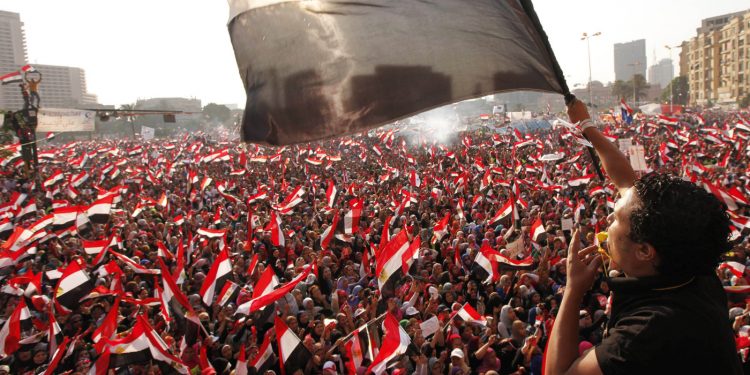 In the latest of the Brussels Morning 10 years after the Arab Spring series, Tarek Magerisi explains the failures of the international community in Libya.

Athens (Brussels Morning) When a young street vendor set himself on fire in Sidi Bouzid, he sparked a wave of unrest in the North African country, leading to the collapse of the Tunisian regime, creating fervour for change and dignity that soon spread in several Arab states.

Hopes for revolutionising the way that states are governed or even addressing the basic demands of an increasingly educated youth have faded in the 10 years since the Arab Spring uprisings.

Following a decade of political wrangling that led the country to civil war and rival institutions in a deeply divided context, Libya now has another UN-backed government with the mandate to rebuild the country. Brussels Morning spoke to Tarek Megerisi, policy fellow at the European Council on Foreign Relations (ECFR). He shared his views on the challenges that lie ahead, the disastrous foreign interference, and the EU’s inability to build a coherent geopolitical role in the country.

Brussels Morning. Among the many different actors and issues around Libya, do you think there is one main problem that stands out and made it so far impossible to find a way out? Is it political, the divisions in the country, international actors, the UN inability, or a combination of all that?

Tarek Megerisi. One of the main under-appreciated reasons is how difficult it will be to build a new state from the rubble of the Qadhafi state. In 2011 everybody thought that a solution would be easy, Libya is a small country, there are no sectarian divides, there is enough wealth so it would be easy to move ahead.

They did not appreciate that for 42 years Libya’s entire worldview and understanding of politics was shaped by a crazy person, which spanned multiple generations.

Libya looked at the world and politics in a very particular way, and this played out after the revolution. Immediately after Qadhafi was out, there was a parliament. But even that parliament was built on the Qadhafi system. If a minister is appointed, he thinks his job is to reassure that everybody in the ministry is appointed from his city and all the benefits go back to it. This factionalism, this competitive nature of Libyan politics created a fragmentation. Then on top of that is the way that the groups in charge behaved.

Even during the revolution, with demands for freedom, for a more inclusive, consensual system, the old men sitting in Benghazi were fighting each other for absolute control. Each had different reasons for what they did, but it was so narrow-minded and selfish, which caused the politics to break down. The different political groups were also fighting each other, with no compromise. They were so desperate, that they started bringing in the military groups as a form of leverage and the irony is that 3-4 years later, the military groups would beat the political groups and control the situation.

BM. How about the role of the UN and international actors?

TM. The UN was always doing the wrong thing at the wrong time. The problem is that the UN is undermined by the member states that created it. It often accepts and is aware of that. Libya was not the priority of the Special Representatives of the UN, their career was. So, they don’t mind leaving Libya with a terrible deal and a framework that would create conflict, but they would leave as long as a deal is reached to say that they created a peace government.

The situation is different now because several countries are entrenched on the ground. But the one country that has done the most to stop Libya from progressing is the UAE. From 2013, they encouraged the political factions that they were close to or had relationships with, to break down the parliament. They grew this idea of Khalifa Haftar to come and build a media and a military enterprise which drove the country to civil war. In 2015, they publicly signed up to support the new Libyan government, but were building a base in the country at the same time. From 2015 until the war in Tripoli in 2019, they were actively pushing towards a war to prevent the country from falling into hostile hands, this was their project. So this project defined Libya since 2011. Today it is different, there countries that are more influential. But the UAE did everything they could to kill Libya’s Arab Spring.

BM. There is now a new government about to try to stabilise the country. It sounds like old promises, old figures. How much room is there for optimism?

TM. This is the trap. To see how all these statements of commitment to support the UN process and the new government and organise elections. Because we have heard that before. The new interim government creates an opportunity, to do things differently this time, to ensure that Libya is unified under one set of institutions, to ensure that those who try to spoil the process or commit war crimes are held accountable. But while the names of the prime minister and the president change, whilst everything superficially changes, it seems that nothing is changing as much behind the scenes, considering the positions of various key countries and how much they are willing to invest in helping Libyans. This is problematic, because in the appointment of a new PM and president there were no standards applied, this is not the product of a robust political process, based on representation and acceptance. Even the road map they are working on, isn’t a road map of legal systems and checks and balances. So this whole process was designed for political expediency, and it still needs a lot of protection and support to work. So whether it works or not it will be a direct deflection of how willing those who claim to support the UN process are to actually make it work.

With this new process comes along list of challenges: sanctions, economy, oil, the old regime, corruption.

With most other countries there is some kind of foundation to build from. In Libya the State is not just broke, it’s a catastrophe. The key for this government is to rebuild things slowly, and create a unified set of institutions. While those who want to cause chaos in the country, people like Haftar, are sanctioned. He wants to create a military autocracy. He cannot be enabled anymore. This is where sanctions come into play. The delusion that you have a parallel central bank, a parallel oil company or a parallel government should be shut down by the international community. International actors can sanction those who are leading the political division, ensuring that businesses and the international economy do not enact rival institutions.

The oil issue will be the key to Libya’s future, to encourage re-building and a return of government services, not just to ensure the oil flows but also to ensure how oil proceeds are spent. The only way forward is to pull in some automated systems which make sure that a specific percentage of the oil revenue will go to municipalities, another will go back to the oil company to upgrade their infrastructure, a third will go to the electricity company to improve electricity distribution.

The politicians are all corrupt, they’re just looking for ways to steal that money, which is why an automated system is the best way to protect the integrity of Libya’s welfare and address the grievances. Then as a member of the public you have way to measure whether the system is working on not, and you know who to blame for it.

BM. What about the EU and its role in the next day in Libya?

I’ll be frank about the EU. Libya is the perfect example to show that the EU is not a serious geopolitical actor. The geopolitical commission that they claim to be running right now is quite hollow. Probably because there is no more immediately pressing foreign policy issues, except maybe Ukraine, and then Libya. Even when they tried to put together operation IRINI there was just no interest from the member states in dealing with Libya. It is naivety but also immaturity. The first ones to complain when the instability in Libya causes a threat from Russia or Turkey, felt closer to home and to our comfort, or causes migration or terrorism threats, they are these same member states. States like Austria, Hungary and Poland maintain that Libya is sending migrants or how come there is a terrorist threat so close to home or how far Turkey is embedded in Libya. But they don’t act as they can. Even now, the general perception in Libya, is to look at Europe as a referee, a guide and a broker for whatever political process.

In Libyan collective memory they still remember when the country was formed in the 1950s, when a Dutch UN envoy helped guide the country’s constitutional process. They looked at Europe this way. But Europe does not answer that call. It is in this setting that Russia, Turkey, Egypt and the UAE impact the country instead. Whilst Italy does one thing, and France and Germany do another, there is no European coherence, there is no mature European foreign policy position.