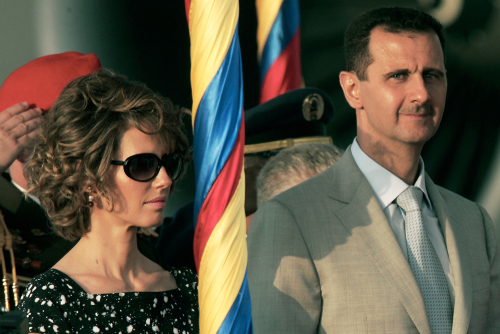 Paris (Brussels Morning) Syrian President Bashar al-Assad will be the candidate to his own succession at the presidential election scheduled for 26 May. The Syrian Ba’ath party leader is seeking a fourth term, in the second ballot to be held during the 10-year war, in which more than 500,000 people have perished and more than 6 million have been exiled and displaced.

Western governments and humanitarians denounce the election as a charade while conflicting interests and the inertia of the international community allow the Assad regime to strengthen its position amidst a worsening economic and health situation.

Mock of an election

With until 29 April for candidates to submit their application, more than 40 hopefuls have applied as yet, including the first-ever woman to present themselves. They join the wide array of mostly unknown figures, most of whom are openly loyal to al-Assad.

Candidates must secure the backing of at least 35 members of parliament, but any one lawmaker can only vouch for one candidate each. With a total of 250 parliamentarians, a maximum of seven candidates will be finally able to participate. Candidates must also have lived for 10 consecutive years in Syria, a condition that automatically bans any exiled opposition members from running.

Western countries and the Syrian opposition have denounced the election as a charade aiming to further cement Assad’s authoritarian rule in the country and called for a political solution before any ballot is held. US Ambassador to the UN Linda Thomas-Greenfield told the Security Council (UNSC) that “these elections will neither be free nor fair. They will not legitimise the Assad regime”.

“France, with its European Union partners, calls for the implementation of a credible, lasting political solution in Syria in accordance with UN Security Council Resolution 2254” the French Ministry of Foreign Affairs added.

Passed in December 2015 by the UN Security Council, resolution 2254 calls for a political solution inclusive of all actors concerned in the Syrian conflict, bar extremist groups such as the Islamic State and al-Qaeda and their local affiliates.

In the first presidential poll to feature more than one candidate in over 40 years, held in June 2014, Assad won a third term with 88.7% of the vote. Amid the raging war, voting was held only in government-controlled areas and Assad’s two opponents were relatively unknown, drawing wide Western condemnation.

The elections come when legal cases against the regime for war crimes have multiplied, brought to European courts under the principle of universal jurisdiction, which allows a foreign country to prosecute crimes against humanity, including war crimes and genocide, regardless of where they were committed.

As the Syrian regime does not recognise the International Criminal Court and with the Russian veto constantly looming over any UNSC procedure, bringing legal suits in this way is the only route for thousands of exiled Syrians to seek justice.

In a historic first trial against two former regime officials, a German court in the city of Koblenz rendered its first verdict last February, sustained by the collective work of the European Center for Constitutional and Human Rights and humanitarian NGOs. More cases are being opened in Europe, including against senior regime officials like Jamil Hassan and Ali Mamlouk, notorious for their role in the intelligence services and the repression of the revolution since 2011.

Additionally, the Hague-based Organisation for the Prohibition of Chemical Weapons (OPCW) has stripped Syria of its voting rights and of holding any offices in its headquarters over its repeated use of toxic arms against civilians and its failure to declare its chemical weapons.

The Assad regime agreed in 2013 to join the OPCW and give up all chemical weapons following a suspected sarin nerve gas attack that killed 1,400 people in the Damascus suburb of Ghouta.

However, the UN-backed watchdog findings report the continued use of chemical weapons in the following years, namely in attacks in 2017 and 2018 on the towns of Saraqib, Ltamenah and Khan Shaikhoun, to name a few.

Increased reporting has also added to calls for justice, including the UN Commission of Inquiry on Syria’s recently concluded findings that innovative solutions must be pursued to address the justice needs for millions of Syrians, outside the stagnating UN context, including the establishment of an ad hoc international criminal tribunal, similar to those created for former Yugoslavia and Rwanda.

“Parties to this conflict have benefitted from the selective intervention and woeful negligence of the international community that has left no Syrian family unscathed”, said Commission Chair Paulo Pinheiro.

But while mountains of UN evidence are being neglected, the Syrian leader has chosen to ignore the cases and arrest warrants, betting on the Russian protection and the “realism” of several world leaders turning a blind eye on crimes against humanity.

France-based professor and author Ziad Majed maintains that Assad’s attempt to bring about a certain stability and demonstrate that reconstruction is under way would reinforce his argument of being the ultimate bulwark against jihadism and sustain the dilemma “me or chaos”, which proves somewhat convincing, especially among some Arab leaders.

A tacit normalisation of bilateral ties with certain Arab states is already taking place, namely with the United Arab Emirates, Bahrain and Oman, who have reinstated their diplomatic missions in Damascus.

This indirect way of gaining legitimacy for his regime, which would not otherwise come through any election result, allows Assad not only to survive but to slowly restore Syria within the context of the Arab League, albeit this being a divisive question among member states.

This parallel process runs counter to the Western efforts to isolate and marginalise Assad through the Caesar Act sanctions and result in a Syrian economy in dire situation that mostly affects citizens but is less efficient against those close to the regime.

The COVID-19 pandemic has provided Assad with another opportunity to strengthen his position, as Sandy Alkoutami and Khulood Fahim point out at the Carnegie Endowment: while the UN called for sanctions against Syria to be relaxed during the pandemic, the posture of the UAE and Russia could be instrumental for Syria’s regional rehabilitation.

UAE Crown prince Mohammed Bin-Zayed emphasised that the humanitarian challenges presented by the pandemic outweigh any political issues between the two countries, while Putin insists that Damascus serves as the sole administrator of crisis measures and aid delivered to Syria.

Putin and Assad held discussions over the provision of Russian aid and vaccines to Damascus in late April, as 203,000 vaccines arrived in Damascus through COVAX, the World Health Organisation’s global initiative to bring vaccinations to poorer countries, UNICEF and WHO said in a press statement.

Separately, a first batch of 53,800 doses of the AstraZeneca vaccine has reached the northwest rebel-held Idlib province to be administered to health workers. Another 1.5 million doses are scheduled over the next year.