Disappointed with the EU policy in Caucasus: we stand with Armenia 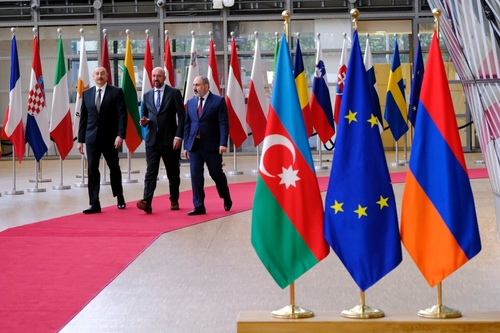 European Council President Charles MICHEL receives the President of Azerbaijan Ilham ALIYEV and the Prime Minister of Armenia Nikol PASHINYAN in Brussels, Belgium on May 22, 2022.

Belgium (Brussels Morning Newspaper) I am deeply disappointed by the fact that the last European Council was silent on updates on South Caucasus, where azeri troops occupied 220 squared kilometers of Armenian sovereign territory, committing war crimes and crimes against humanity such as executions and tortures.

Here I see many similarities with what is happening in Ukraine, with a democratic country, Armenia, being attacked by an aggressive authoritarian state, but there is also a difference that I cannot tolerate.

Indeed, while being rightfully supporting Kiev against the barbaric behavior of Putin’s regime, our Union is perceiving Azerbaijan as a reliable partner.

And not it’s not, because realpolitik cannot replace our values, and these double standards are undermining our credibility.

Armenia is a vibrant democracy that is not a Russian ally but, on the contrary, is simply a hostage of the Kremlin, its assertiveness and threatening attitude, and its decision to sacrifice Yerevan in exchange of a fully-fledged alliance with Baku and in compliancy with Ankara.

We must get out from this gas dependency trap from all the authoritarian regimes, and the reluctancy on price cap is a huge mistake

The deployment of our monitoring mission is a first step, and its mandate should be extended permanently for all the time needed, as well as the number of servicemen. But we need more, because blatant violations of international law should be condemned always and everywhere.