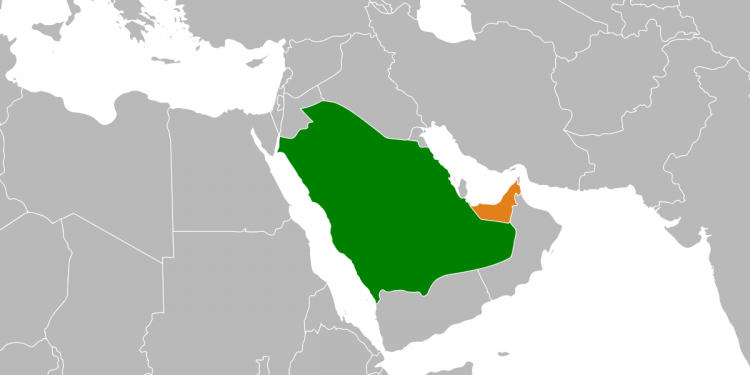 Paris (Brussels Morning) The recent public spat within OPEC laid bare the increasing divergence of strategic vision and scope between the UAE and Saudi Arabia who, for the past decade, had risen as the rapprochement par excellence within the GCC. While they shared similar geopolitical and foreign policy interests under the leadership of younger royals, the partnership is gradually turning into a competition.

But as many observers like to point out, the relationship between the two was never a friendly one and risks unravelling within today’s strategic landscape. “That these challenges are resurfacing reminds us that intra-Gulf competition has long underpinned the GCC”, a Foreign Policy report states. For his part, Baker Institute Fellow Kristian Ulrichsen adds: “the gathering dispute is better understood as a return to the pre-2015 status quo than a unique diplomatic breach”. Furthermore, it is anxiety over the post-oil era that drives the current competitive and increasingly public disagreements. The hyper-nationalism in Gulf countries’ economic and business strategies is thus likely to drive their rivalries for the next few years, but a conflict looks highly unlikely in any eventuality.

Return to the norm rather than unravelling

“Saudi Arabia and the UAE had a record of tense relationships over territorial issues that predated and overshadowed the formation of the UAE in 1971 and extended well into the 2000s, and the two were not necessarily viewed as ‘natural’ bedfellows” Ulrichsen explains. Territorial disputes evolved into competition for leverage within the GCC as reluctant steps towards integration were taken later on: “Tensions peaked late in the decade when the UAE withdrew in anger from the planned GCC single currency in 2009, following a contested decision to locate the GCC Central Bank in Riyadh rather than Abu Dhabi.

The rapprochement began after the Arab Spring against Islamism and the Iranian influence in the region amongst other factors. Saudi and Emirati leaderships share a common vision of modernising their societies in a top-down manner; meaning that any social reforms and the whole economic and strategic direction of each country comes from and remains completely controlled by the ruling families. In this sense, the impetus brought by the Arab Spring for social change and the empowerment of civil society and of democratic norms was a shift in the opposite direction. The call for change from the bottom up was then seen as too dangerous a prospect for the liking of the Gulf monarchies, which partnered up in order to counter what they considered a rising Qatari and Turkish influence in the region.

But a decade on, the strategic landscape of the Gulf and the wider Middle East has shifted, and the emerging challenges lead to a recalibration that could affect regional and global affairs. Saudi Arabia and the UAE have increasingly diverging policies on a number of geopolitical issues, namely the quagmire in Yemen and the stance towards Iran, Qatar, the Muslim Brotherhood and Turkey. “While both remain distrustful of the Iranian regime, Riyadh has judged it both necessary and feasible to figure out a modus vivendi with Tehran, while for Abu Dhabi the most important threat was always the Muslim Brotherhood and those aligned with or sympathetic to it”, said Gerd Nonneman, Professor of International Relations and Gulf Studies at Georgetown University.

As much as the peoples’ aspirations remain largely unaddressed since the 2011 and subsequent uprisings, it is other questions that dictate current affairs, and will influence the evolving competition between the two GCC superpowers. Most importantly, preparing for the post-oil era by diversifying oil-dependent economies and rapidly increasing populations, all within the context of recovering from a pandemic that slowed down the global economy.

The pressing need for diversification gives way to investing in sectors other than oil and – by extension – to new areas of competition. In the case of the UAE and Saudi, this translates into crucial sectors of trade, business, tourism and transport.

Riyadh has warned foreign companies that they could lose state contracts if they do not establish a regional headquarters in the kingdom by 2024 and, in another challenge to the UAE’s status as a commercial and business centre for the region, recently amended the rules to imports from the Gulf states to exclude products made in free zones, a major driver of Dubai’s economy, or those linked to Israel.

But in order to support diversification and investment in these sectors, the Gulf countries still rely on oil revenues. However, for the mega-projects to succeed in the optimum fashion, the way in which oil revenue is exploited is diverging. As Forbes analysis notes for the Emiratis who already have a diversified economy, the need is pressing to monetise reserves as fast as possible. But for the Saudis who lag behind in their diversifying projects, the utmost need is price stability in the long run, or to keep oil underground for as long as possible.

That would allow for the Saudi economy to adapt to the current climate and finance projects in new sectors, such as transportation, tourism, digitalisation and innovation.

But the projects announced up until now are very similar to projects and sectors already developed by other Gulf countries, and not only the UAE.

The Saudi project to launch a second national airline proves a lack of imagination and innovation in the quest for diversifying. Alex Macheras, a UK-based aviation analyst told al-Monitor: “It is simply too late; they have missed the boat. There is no need for another airline to replicate what Qatar Airways and Emirates have already achieved in terms of being the global super-connector airlines”. Apart from risking a lack of competitive advantage vis-à-vis established competitors, industry experts also wonder whether the timing is correct for such endeavours in the immediate post-COVID context, where the aviation industry has recorded massive losses. It is also seen as a “vanity project” to imitate the UAE and Qatar’s successes, as with investing billions in attracting high-profile cultural and sporting events featuring global celebrities to bolster Saudi Arabia’s reputation internationally.

Under Crown Prince Mohammed Bin Zayed, the Emirates strives to raise a more assertive voice in Gulf and global affairs for a few years and the rising economic competition on economic sectors beyond oil are a clear manifestation of the regional recalibration, Bader al-Saif notes for Diwan Carnegie. Thus, the current spat within OPEC, does not reflect only a micro, short-term diverging vision on how to proceed with oil prices. It essentially concerns the diverging ways of maximizing the oil revenue, in order to strengthen the independence from it in the long-term, which could snowball into further friction in the region. “However, the region is not there yet and does not need to be when it can accommodate more than one economic powerhouse if Gulf states avoid the pitfalls and temptations of replicating their economic diversification models without much innovation, which could lead to more aggressive forms of competition”, al-Saif adds.

Another issue that may lead to further friction, is the institutional vacuum in the Gulf context. Both the GCC and the Emirati-Saudi Coordination Council, created in 2016 still depend on personal relationships among Gulf leaders, and these tend to fluctuate according to norms, varying from tribal affiliations to geo-economics, to the dynamics within ruling families.

The current spat will be resolved and the GCC will endure, most observers agree, as the benefits of the partnership far outweigh the costs. But according to Bloomberg analysis, the conflict could still manifest as a powerful form of competition or a brewing intra-Gulf conflict, which in turn could affect regional stability.

Analysis by Stratfor, on the other hand, underlines that rather than weakening, the relationship is in fact normalising: “It is not a shift towards a virulent rivalry like others in the region, but rather a turn away from a period of unprecedented closeness that emerged after the Arab Spring in 2011. And, like the external factors that brought Saudi Arabia and the United Arab Emirates close for nearly a decade, changes in regional and global geopolitics are now again forging new wedges between them by periodically putting their interests at direct odds”.

In any case, a weak institutional context is an impediment, both for any potential integration and for any dispute resolution attempt.

The monetary union, the normalisation of relations with Israel and the solution brought to the Qatar blockade in early 2021 are examples of decision-making outside the GCC context. While the Emiratis almost had to be dragged to al-Ula for the staging of the welcoming back of Qatar into the big GCC family, Saudi Arabia and Kuwait demonstrated quite different levels of appreciation of the Abraham Accords, between the UAE, Bahrain and the state of Israel. “Abu Dhabi will quite likely continue to drag its feet and continue to needle Qatar, including by media and lobbying campaigns, but will not formally go against the al-Ula agreement”, said Nonneman. Furthermore, as Foreign Policy notes, Kuwait remains faithful to the Gulf partnership framework, while Oman is drawing closer to Riyadh and Bahrain is getting ever nearer to Abu Dhabi.

National interests such as infrastructure and economic security are thus taking priority over the common security narrative that once drove its creation. The hypernationalism driving the current decision-making on diverse trajectories (political, financial, commercial) can have a significant impact on intra-GCC relations, as well as the way these countries seek new bilateral partnerships with global players, such as China, India and Russia. Although the GCC states are bound by familial, tribal and commercial ties, the current state of affairs points to less and less consensus for the years to come.

Beyond the clash within the OPEC that was heavily reported in the media, it is the less noticed signs of growing competition that one should be keeping an eye on.