by Eliška Pohnerová
in Europe 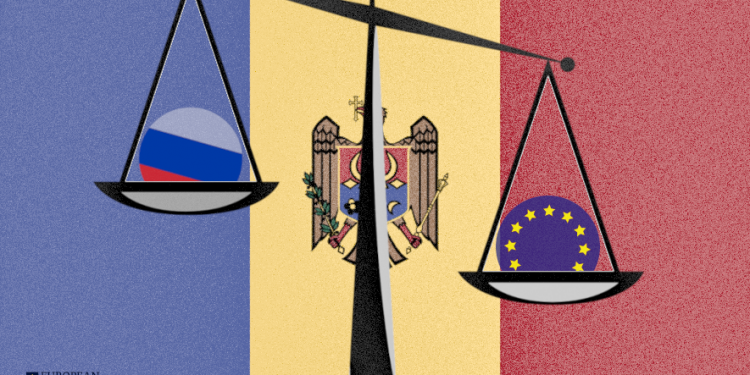 Brussels (Brussels Morning) The long-awaited, dreaded parliamentary election in Moldova took place on 11 July 2021. While pro-Russian figures had attempted to avoid it, the Moldovan political right had been pushing for it, seeking to shake up the parliament to better reflect Moldovan sentiments. And as it turned out, they were quite successful, winning 63 out of 101 seats. The outcome gives the pro-EU president the majority she needs to proceed with liberal reforms.

Combining several geopolitical phenomena, the Moldavan snap election featured a variety of issues and debates, among them the West v East dichotomy, emigration, and the power of the diaspora, or the influence of separatists on home affairs.

Moldova back in 2016: The pro-Russian Igor Dodon just won the presidential election, by defeating the pro-Western candidate Maia Sandu, on an election promise to dismantle oligarchic power structures. Yet, Dodon’s promises started to fall short of expectations and the country’s situation deteriorated, to the point where it was even labeled by the EU as a “state captured by oligarchic interests” that was causing “grave concern about backsliding in relation to democratic standards in Moldova”. Later, the EU even suspended macro-financial assistance to Moldova (MFA) citing reasons such as the deterioration of democratic standards, restrictive electoral reforms, and human rights violations.

Moldova, November 2020: Another presidential election, this time won in a landslide (57.75%) by the previously defeated Maia Sandu, the pro-Western and pro-reform candidate campaigning against corruption and for the rule of law.

Sandu’s victory amounted to a public outcry of support for EU values, and, at the same time, detachment from the Russian sphere of influence. The victory was even accompanied by public protests demanding the resignation of the pro-Russian prime minister. Yet, little was realised by way of reform in the country .The reason was the 2019 Moldovan parliament that kept obstructing Sandu’s actions. While Sandu’s Party of Action and Solidarity (PAS) held only 15 out of 101 seats, Dodon’s Party of Socialists (PSRM) had a majority of 37 seats (plus the 19 of a coalition partner).

Moldova, 2021: From the moment she won, the newly elected president sought to force an early parliamentary election in order, as she stated, to “elect a parliament that truly represents Moldovans, and a government that will work in their best interests”. It was also essential if she wanted to gain governability. The 2019 socialist-led parliament was refusing to appoint Sandu’s preferred prime minister and even established a Covid-19 state of emergency to avoid the possibility of a snap election. Later, after the controversial state of emergency had been cancelled, the snap election was set to move forward.

How accurate were the predictions?

Based on the 2020 presidential election numbers, about 1,633,000 people were expected to cast their ballot. In such circumstances, Sandu would have needed between 645,000 and 800,000 votes to secure the PAS primacy and possibly the parliamentary majority. The final polling before the election indicated a victory for PAS with between 36.5% and 50.5%. The main opponent, the coalition of PSRM and PCRM /BECS/ was estimated at 28%-to-36.7%.

In fact, PAS obtained 52.8%, representing some 780,000 votes out of the 1,477,574 voter turnout, far above the highest estimate. BECS ended up with less than the lowest polling estimation, 27.17%. The outcome secured PAS 63 seats, thus a very comfortable majority.

Based on the 2020 presidential election result, where Sandu received 92% of the vote, PAS was expected to be mainly reliant on the diaspora, which consists of more than a million people (about a third of the population) for its success. To secure these votes, additional polling stations were opened outside the country. Consequently, about 182,445 voters from abroad (amounting to 86% of the diaspora electorate) supported the liberal direction of Moldova as embodied in PAS.

Another entity with the power to influence the election outcome was Transnistria, the breakaway region claiming independence since 1990 with support from Russia. Transnistria accounts for about 10% of the electorate, heavily favouring relations with Russia, thus voting for the socialist coalition (BECS).

Since Transnistria had not been included in the opinion polling, the higher preferences for the socialists could have been predicted. Yet despite this, only 12% of Transnitrians voted in 2020, and this was not projected to improve in 2021. The reason is the difficulties Transnistrians face during elections Since the polling stations are not located in the breakaway territory, distance became an issue as well as the possibility of clashes with pro-Sandu Moldovans. In the end, the tally from Transnistria showed BECS winning with 62.21% while defeating PAS with 13.59%. This did not influence the overall vote significantly.

Will Moldova join the EU?

President Sandu had hoped for a parliamentary majority to enable her to move Moldova to the West after governing with a hostile parliament. “I trust that our citizens will choose the right path to creating a developed and democratic state where people can live in peace and wellbeing”, she said, as reported by Al Jazeera.

According to analysts, Moldovans do wish for a positive change and reforms, especially after the COVID-19 pandemic. Moldova, one of the poorest countries in Europe, saw its GDP fall by 7% in 2020, while employment fell to a five-year low. At the same time, the country is struggling with vaccinations According to Reuters, by late July, Moldova had been able to vaccinate only 17.7% of its population, whereas Slovakia and Slovenia had managed to inoculate about 40% of their respective populations.

Being one of the poorest countries in Europe, Moldova also struggles with corruption — a notorious example being the 2014 one billion dollar bank fraud. According to the Corruption Perceptions Index issued by Transparency International, Moldova occupies 115th place with 34/100 points. Along with Ukraine and Russia, this represents the worst corruption result in Europe. Anti-corruption is one of the PAS’s main programmes up there with EU integration and economic development. Other individual objectives include an increase in the national minimum pension, cancellation of parliamentary deputies’ immunity, depriving officials of illegally acquired assets, and cooperation with Ukraine on the Transnistria situation.

Moldova is not a member of the EU, but it is a participant in the EU’s Eastern Partnership initiative for post-Soviet countries. Representatives from Moldova, Georgia, and Ukraine signed a joint memorandum on 17 May, 2021, promising to bring their nations up to EU standards in order to move forward with EU integration. Moldova, like Georgia and Ukraine, is caught in the crossfire of Russian interests, diminishing its chances of joining the EU. Moldovans will also have to demonstrate that the nation’s pro-Western sentiment will persist beyond one presidential term.