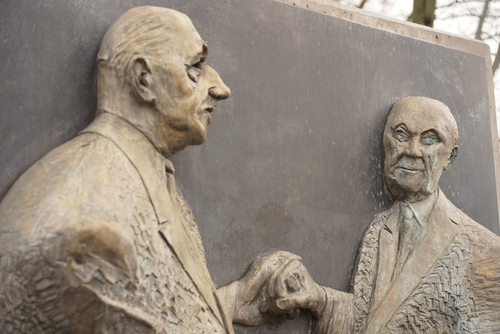 Speaking at Sorbonne University at the meeting of approximately 300 officials from the two countries, Macron pointed out that the treaty opened doors to reconciliation between France and Germany, according to DW reporting on Sunday.

He added that France and Germany must “become pioneers to relaunch Europe” and stressed the importance of building “a new energy model” and encouraging innovation to make sure the EU become “a geopolitical power in its own right, in defence, space and diplomacy.”

Scholz stated that the future of Europe rests on the “driving force” of France and Germany, stressing “the German-French engine is a machine for compromise – well oiled, but from time to time also loud and marked by hard work.”

Commenting on the war in Ukraine, he announced Germany and France would support the country “as long as necessary.”

After the meeting, German and French ministers held a joint Council of Ministers at the Élysée Palace where they discussed energy, economic, defence and security policies as well as military support for Ukraine.

Macron noted that Paris was still thinking about supplying Ukraine with tanks, stressing that “nothing is excluded.”

He added that any weapons deliveries to Ukraine to help the country fight off Russian forces should be decided and coordinated collectively with allies, including Germany.

In recent days, Germany has come under pressure to deliver tanks to Ukraine, with Berlin announcing it would decide on the matter in coordination with allies. Scholz reiterated Germany’s position on Sunday.

Commenting on energy cooperation, Macron pointed out that Germany will join the new hydrogen pipeline project between Spain and France.

The meeting in Paris was the first in-person intergovernmental meeting between France and Germany since 2019. The meeting was planned for October last year but was cancelled abruptly, after which the two countries reaffirmed their cooperation.

The Élysée Treaty was signed by late French President Charles de Gaulle and late German Chancellor Konrad Adenauer in 1963, ending centuries of rivalry and creating the foundation for cooperation.