Relationship Europe-Iran should be grounded in human rights 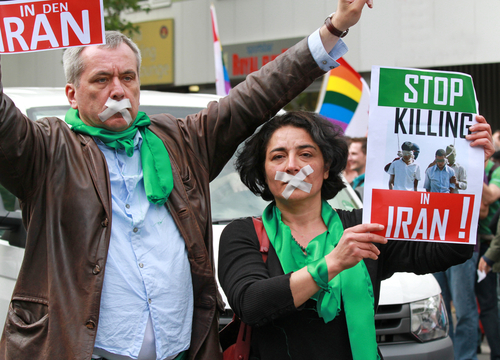 BERLIN - JUNE 19: Activists demonstrating against the killing of gay people at the Christopher Street Day Parade June 19, 2010 in Berlin, Germany.

Belgium, (Brussels Morning Newspaper) Iran is a deeply diverse country with different ethnic minorities, religions and languages. Its richness lies in its diversity, much like the European Union. However, the democratic deficit there withholds most of the potential to this richness. Minorities in Iran make up between 40% and 50% of a population of 80 million and they are the heirs of a long history shaped by discrimination, which is also enshrined in law.

Given the sensitive situation of religious and ethnic minorities in Iran, the idea behind the meeting “Challenging Minority Discrimination in Iran”, organised in the European Parliament on May 11th, together with The Unrepresented Nations and Peoples Organization (UNPO) and Minority Rights Group, is to offer the opportunity for key human rights actors and organisations to discuss ways forward for promoting minority rights.

A special thanks goes to Mr. Javaid Rehman, UN Special Rapporteur on human rights in Iran who attended this event. The EU is a strong partner of the United Nations’ multilateral system and we are always happy to welcome UN human rights officials to the European Parliament. His presence shows that the EU is committed alongside the United Nations to strengthen multilateralism everywhere and we are as well committed to democratising multilateralism and ensuring that voices that are not often heard are able to speak and be heard.

The EU can serve the purpose of promoting this vision of human dignity and security. We Europeans should use all the tools at our disposal to promote policies towards the protection of minorities and foster a better perception of them, not as a burden, but as our brothers and sister.

The foreign policy debate in the EU on Iran revolves mostly around question such as the Iran Nuclear deal and the future trading relationships with the country. This is normal given that the EU has taken a leading role in such negotiations, but it is always important to highlight the human rights aspects alongside these more traditional foreign policy goals.

While the JCPOA process is politically complex, Europeans nevertheless need to ensure a parallel focus on human rights, using the opportunities presented by negotiations and wider political dialogues to press Tehran on the issue, reinforcing the message that this is a strong European concern.

Europe should seek to forge a new relationship with Iran that is grounded in human rights. Overall, by promoting human rights and security we can also achieve goals that benefit us all. Security and stability cannot be achieved if the rights of all citizens, including minorities, are respected. In order to do so, we should strengthen our alliance with and support Iranian human rights activists, many of whom risk their freedom and lives in order to express not only their own grievances but those of vulnerable and targeted groups, whose voices would not otherwise be heard.

In this spirit, I hope we can have a constructive discussion on forming broad coalitions, and this will hopefully help better coordinate advocacy strategies.