The last farewell to Mikis Theodorakis

by Alexis Georgoulis MEP
in Opinion 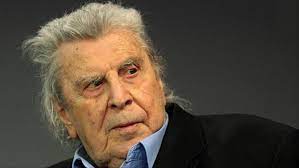 Athens (Brussels Morning) The music and the songs by Mikis Theodorakis soundtracked my youth, as well as that of many generations in Greece. Furthermore, my adult life, especially my way of thinking about art and politics, is deeply influenced by a speech Theodorakis gave in 1988 during an International Congress organised in Tübingen by the Free Artists, a movement created by Theodorakis’ initiative. Quoting from this speech: “The industrial society creates empty people. Therefore, we are heading towards the end of civilisation as we know it today. […] If radical changes do not occur, changes in the way we organise our lives, then it is certain that Art will have no reason to exist. Because Art presupposes dialogue.” My political philosophy is based on this last phrase. Art, as well as politics, presuppose openness and true intention for honest interaction and dialogue.

After the death of Mikis Theodorakis was announced, the Greek state decided on three days of national mourning; these are the highest honours that can be attributed to the prominent personalities of the nation.  Also, international tributes served as a reminder of the numerous causes he supported. Theodorakis was an internationally recognised composer, with several awards. His work is incredibly rich and diverse. He was a musical genius who composed very different types of music, from Greek folk to classical music. The quality of his creations contributed to the rise of the level of Greek music production, but also, he brought Greek music to concert venues all over the world. At first, they were concerts against the Greek dictatorship of 1967-1974, later against the use of nuclear power or in support of Amnesty International, the peace movement and Greco-Turkish friendship. It should be noted that in 1994, the signing of the agreement between the Palestinians and Israelis was celebrated in Oslo in the presence of Peres and Arafat with the presentation of Theodorakis’ two works related to these people: “Mauthausen” and the “Hymn to Palestine”. Also, we should not forget his works “Canto Olympico” and “Hellenism”, composed and presented at the opening ceremony of the Olympic Games in Barcelona, 1992.

His musical style, inspired by his influences from the music of his country, managed to reach international audiences also because he composed music for English-speaking films. For example, his Zorba’s Syrtaki, closing the film by Michalis Cacoyannis “Zorba the Greek”, is the most universally well-known Greek melody. Other important international films he wrote the music for are “Phaedra” by Jules Dassin, “Electra” and “Troyans” by Michalis Cacoyannis, “Ζ» and “State of siege” by Kostas Gavras. Moreover, his work includes music for Greek-speaking films and for ancient and modern theatre performances.

Furthermore, thanks to his music work on poetry, important poems by international and Greek poets reached broader audiences. He composed music for poems by Frederico Garcia Lorca, Nazim Hikmet, and Pablo Neruda, and also by the Greek Nobel winners Giorgos Seferis and Odysseas Elytis, as well as by Giannis Ritsos, Manolis Anagnostakis, Tasos Livaditis, I. Kampanellis, and many others. Thus, through his work, the difficult-to-reach art of poetry made its way to the hearts of simple ordinary people.

He always kept his art open and deeply connected with society and the voices of everyday people. He was an activist who took many initiatives, like the creation of the “Free Artists” movement, supporting the need to increase the free time of workers, so that they have the opportunity to come in contact with art. His creations were always up-to-date, constantly conversing with history and touching the hearts of all people, educated or not.

I will never forget his image when he conducted the orchestras that performed his works. With his eyes closed he was stretching out his long arms, like a big embrace ready to enclose us all, like the wings of a huge bird ready to fly free. In my mind, there is no need for a last farewell. Because our Miki, will always be present and alive, inspiring all those following his works to also follow his path and vision for world peace and solidarity.

Thank you, Mikis. We will always look for and follow your star and light.