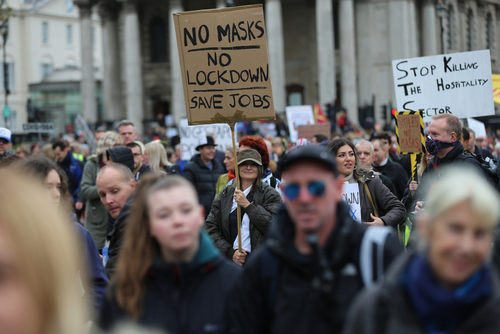 Brussels (Brussels Morning) Protests against restrictions have continued in Europe as authorities reimpose curbs to control the spread of coronavirus.

Thousands of demonstrators took to the streets in the Czech Republic and Belgium on Sunday, following protest rallies in Austria and Germany on Saturday, DW reports.

Authorities estimate that 5,000 people protested in Brussels on Sunday, with protesters carrying placards decrying “vaccine dictatorship” and restrictions on access to public life.

Belgian authorities arrested 11 people before the protest because they were carrying fireworks. An additional 30 or so were detained after the protest as a group threw objects at police.

In Prague, thousands protested on Sunday against plans to make vaccination against COVID-19 mandatory for some professions and age groups. Protesters carried Czech flags and chanted “freedom.”

The Czech government is planning to make vaccination against COVID-19 mandatory for people over 60 years of age, and for medical workers and students, firefighters and policemen.

The mandate plan was introduced by the previous Czech government at the end of 2021, with the new government thinking about dropping the age-based mandate, but not profession-based ones.

In Germany, protesters took to the streets of Düsseldorf, Frankfurt, Hamburg and Koblenz on Saturday.

More than 13,000 people marched in Hamburg against restrictions and new vaccination mandate for hospital and nursing home workers.

At the same time, some 2,500 counter-protesters expressed solidarity with a local politician in Minden whose home was targeted by protesters. In Dresden, more than 3,500 people held a silent protest against violence at anti-restriction protests. They also lit candles for those who had died from COVID-19.

Approximately 40,000 people marched in Vienna on Saturday against the government’s restrictions and plans to impose vaccine mandates.

Austria’s n Chancellor, Karl Nehammer, insisted he would not back down and declared that the vaccination mandate will come into effect at the beginning of February.

Authorities across the EU are still trying to curb the spread of coronavirus by imposing lockdowns and mandating vaccination as the latest wave of infections spreads across the bloc. The latest available data indicates that newest variant of SARS-CoV-2 is more infectious but less lethal than its predecessors.