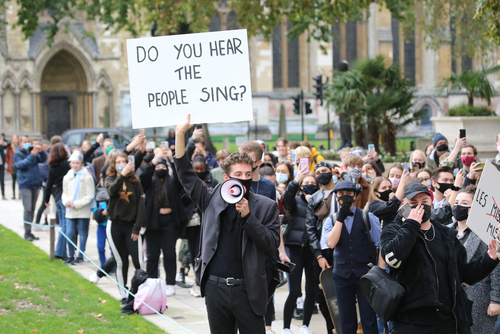 Approximately 14,500 people protested in Paris for the seventh consecutive week, with the Interior Ministry pointing out that 222 protests took place across France, according to RFI reporting on Sunday.

In Berlin, several thousand people protested against restrictions put in place to curb the spread of coronavirus on Saturday and Sunday, according to Reuters reporting on Sunday.

Protesters in Berlin decried what they describe as “vaccine apartheid,” with Berlin police noting that they had detained approximately 100 demonstrators on Saturday and around 80 on Sunday.

Roughly 65% of Germans have had at least one shot of COVID-19 vaccine and about 60% are fully vaccinated, but infections are on the rise and officials are encouraging the citizens to get vaccinated.

Berlin officials have come under fire for urging teenagers to get vaccinated and authorising vaccination of those over 12.

Some protesters announced they would not vaccinate their children against COVID-19.

Under the vaccine pass system, access to cinemas, theatres, restaurants, large shopping centres and long-distance trains is limited to holders of the document.

The government claims that introduction of the system is necessary to persuade the citizens to get vaccinated and avoid another nationwide lockdown.

According to French health authorities, close to 72% of the population received at least one COVID-19 vaccine shot and about 64.5% are fully vaccinated.

Meanwhile, Denmark announced plans to lift all remaining restrictions by 10 September, with the Ministry of Health declaring that SARS-CoV-2 was “no longer a critical threat to society” due to the high vaccination rate, according to The Guardian reporting on Friday.

The ministry stressed that authorities would not hesitate to act “if the pandemic once again threatens the essential functioning of society.”

Approximately 71% of Danes have been fully vaccinated and the country boasts one of the highest vaccination rates in the EU, after Malta and Portugal.