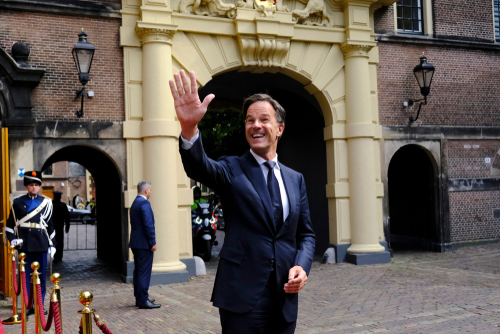 Brussels (Brussels Morning) Dutch Prime Minister Mark Rutte’s fourth government was finally sworn in on Monday, after a record 299 days had passed since the parliamentary election that was held in mid-March last year.

The new government represents a return of the four-party coalition which ruled the Netherlands since 2017, before it ceremoniously and collectively resigned in January 2021. That came in the wake of a social security scandal, which saw thousands of parents wrongfully accused of fraudulently claiming child benefit allowances.

Since the March election, the leading parties have been deadlocked in their negotiations on forming the next ruling coalition. It took months of talks just to agree on the specific parties to be allowed sit at the table. Finally, after a record-breaking 271 days of negotiations, Rutte’s centre-right People’s Party (VVD) reached a coalition deal with the progressive Democrats 66 (D66), the centre-right Christian Democratic Appeal (CDA) and the centre-right Christian Union (CU).

The new-old coalition has promised to end the years of austerity with a slew of generous spending on sustainable energy, housing, childcare and education, spurred by ultra-low interest rates. The four parties face an uphill battle to regain the public’s trust. Polls show public confidence to have been significantly eroded by almost  a year of political infighting between the ruling parties.

Should Rutte, first elected PM in 2010, maintain his ruling coalition and his hold on power until August, he will be on track to become the longest-serving prime minister in the history of the Netherlands.