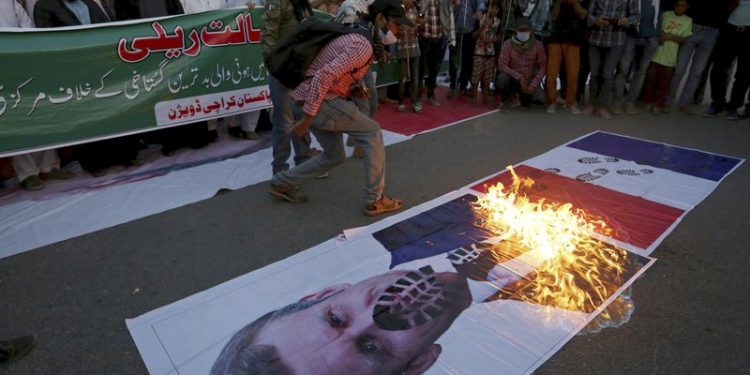 In an interview with Al Jazeera on Saturday, Macron pointed out that he understands the shock some Muslims may feel over caricatures, but stressed that freedom of speech includes the right to satirise. While no religion is exempt from mockery, he said, violence is not an acceptable response when objecting to a cartoon. France holds freedom of thought and expression in the highest regard, Macron added, pledging to continue defending these freedoms in his nation. .

Following the interview, Islamists organized more rallies against France. Supporters of the Islamist Jamaat-e-Islami party in Pakistan staged a protest some 500-strong on Sunday in Karachi, where protesters burned an effigy of Macron and called for a boycott of French products.

Earlier that day in Karachi, hundreds of students held a protest and pledged to sacrifice their lives to defend the honour of Islam. They condemned blasphemy in France while defacing French flags and pictures of Macron. In Multan, Pakistan, protesters called for a boycott of French products, burned an effigy of Macron and asserted that Muslims would not tolerate blasphemy. They called on western counties to provide proof that they were civilized.

In Beirut, Lebanon, a dozen or so protesters marched to the French Embassy, where security has been tightened.

In Ahmedabad, India, protesters scattered photographs of Macron on the streets leaving them for pedestrians to walk over and vehicles to drive over on Sunday. Islamist groups protested in Mumbai and Bhopal on Friday.

In Istanbul, Turkey, Islamists held a rally on Sunday, protesting against France and Macron.

Crown Prince of the Emirate of Abu Dhabi, Mohammed bin Zayed Al Nahyan condemned the terrorist attacks in France in a telephone call with Macron, Reuters reported Sunday. He said there was no justification for crime, and rejected outright violence and terrorism as well as hate speech.

On Saturday, Canada’s Prime Minister Justin Trudeau asserted his support for freedom of expression, but cautioned that this freedom must be exercised responsibly.  He pointed out that speech impacts others, especially those who experience enormous discrimination. In expressing solidarity with France, Canada’s Opposition leader Erin O’Toole pointed out that an attack on freedoms in France is an attack on all democracies. Terrorists will not make us bow, O’Toole stated, adding that Canada should fight for freedom of expression.