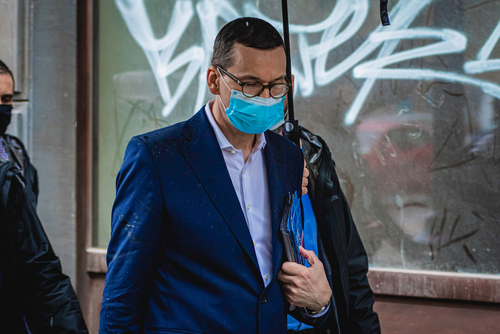 Brussels (Brussels Morning) Poland’s Prime Minister, Mateusz Morawiecki, warned on Monday that the EU could unravel without “democratic control” over the bloc’s institutions.

He called on his fellow EU leaders to protect the sovereignty of member states, while stressing that Poland remains dedicated to the EU project, France24 reported.

In his letter to EU leaders, Morawiecki warned that the EU could become a “centrally managed organism run by institutions deprived of democratic control”, a situation, he said, that “threatens the future of our union.”

“Today we are dealing with a very dangerous phenomenon whereby various European Union institutions usurp powers they do not have under the treaties and impose their will on member states”, Morawiecki asserted.

“If we do not stop this phenomenon, all will feel its negative effects”, he cautioned, noting that “today it may concern just one country – tomorrow, under a different pretext, another.”

The Polish PM pointed out how the EC has new powers that allow it to withhold payments from EU funds to member states it sees as violating EU rules.

He hoped that “without imposing one’s will on others, we can find a solution that will strengthen our European Union.”, observing that the primacy of EU rules was “not unlimited”, while maintaining that no sovereign country could disagree with this view.

Friction between Poland and the European Commission has been rising in recent years and the dispute escalated last month when the Polish Constitutional Tribunal ruled that the country’s constitution has primacy over EU rules.

Germany and France criticised the ruling, while Hungary defended it.

The Tribunal stressed that some EU rules were “incompatible” with the Polish constitution and added that the EU Court of Justice was interfering with the country’s judicial reforms.

The EC maintains that Poland’s judicial reforms threaten the independence of courts, but the Polish government insists that the reforms are essential to tackle corruption in the system.