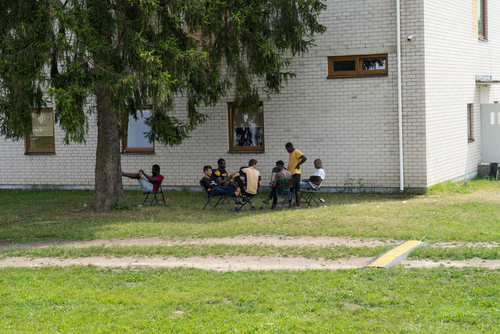 Brussels (Brussels Morning) Belarusian President Alexander Lukashenko warned on Monday of “a humanitarian catastrophe on the border” with Poland.

Commenting on the migrants on the border, he added “we dressed them, we brought them some firewood and some shawls”, as he stressed how well Belarus had treated them, Reuters reported.

The EU has accused Belarus of pushing migrants, mostly  from Iraq and Afghanistan, across the border with the bloc in response to sanctions. Belarus and the EU have accused each other of causing the situation at the border.

Lukashenko warned that migrants could “freeze in the winter” and reiterated that a humanitarian catastrophe is brewing on the border, adding that the West is responsible for it.

Commenting on military exercises by NATO members in neighbouring Ukraine, Lukashenko warned that Belarus and Russia will mount a joint response. He did not provide any details as to what that response might be.

While not a NATO member, Ukraine has been seeking closer cooperation with Western militaries and is hoping to join the alliance, a move Russia opposes.

Russia, commenting on the situation on Monday, warned that NATO’s expansion of military infrastructure in Ukraine crosses a red line.

“You see, they are dragging NATO troops there, to Ukraine,” Lukashenko warned, maintaining that “under the guise of training centres, they are actually creating bases.”

He stressed the importance of reacting to this move and pointed out that he had discussed the matter with Russia’s President Vladimir Putin.

“The Russian president and I have held and are holding consultations on this issue and have agreed that some action should be taken there”, he declared. “Otherwise, tomorrow we will have an unacceptable situation right on the border between Belarus and Russia.”