Man arrested for attempted murder after pushing woman on track 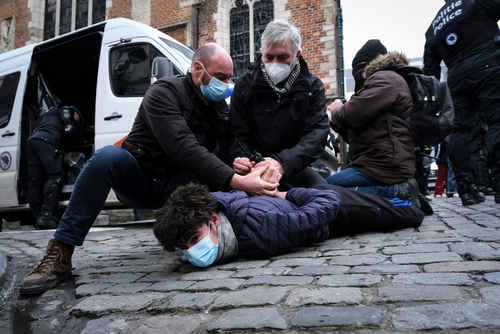 Protesters are arrested from riot police during an unauthorized demonstration called "Stop the racist justice" in Brussels, Belgium on Jan. 24, 2021.

Brussels (Brussels Morning)A young man deliberately pushed a woman onto the tracks at around 7.45 pm on Friday in the Rogier metro station in Brussels. The metro was able to stop just in time. The man was arrested and the public prosecutor of Brussels has requested his arrest for attempted manslaughter. It is not yet clear why the man pushed the woman onto the tracks.

“According to preliminary elements of the investigation, and in particular the analysis of video surveillance footage, it appears that a young man, after walking up and down the platform, pushed a woman onto the subway tracks as the subway arrived at the station,” the prosecutor’s office said, according to a report by BRUZZ. It would be a young man with French nationality, born in the year 1998.

The assailant immediately ran away and fled over the subway tracks. “Thanks to the dissemination of the images of the suspect within the police forces, he was intercepted a few minutes later while he was in the De Brouckère metro station,” the prosecutor said.

After questioning by the police, the suspect was placed at the disposal of the Brussels public prosecutor’s office, which has requested the man’s arrest for attempted manslaughter. The investigating judge must make a decision within 48 hours. The investigation is still ongoing to clarify the precise circumstances and to determine the motive of the suspect.

“The driver pulled the brakes when he saw the person on the tracks and stopped in time,” says An Van Hamme of STIB. “The driver has reacted very well, but he is in shock and so is the person.” The public prosecutor also praises the metro driver: “Thanks to the driver of the metro, who was able to intervene very quickly, the lady was able to be rescued. He was warned by other people who were on the platform and waved at him so that he could immediately intervene. It’s almost a heroic act,” he said at a press conference on Saturday.

“We were very lucky that the woman survived. This is an attempted murder,” said ACOD union representative Mohsine Rachik. “We are all shocked by the images.” According to the union representative, security officers were also able to inform the conductor, so that the metro was able to stop just in time.

On Friday evening, metro traffic between the stations Elisabeth and Kunst-Wet was stopped for half an hour.