Naked cyclist gets hit during Cyclonudista 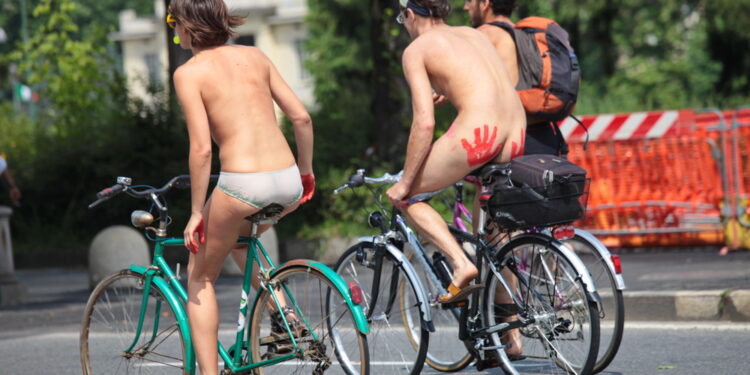 Brussels, (Brussels Morning)- Cyclonudista cyclists rode naked through the streets of Brussels for the sixteenth time on Saturday to draw attention to the vulnerability of cyclists. An incident on De Brouckèreplein marred the otherwise playful action. One of the participants was punched in the face.

After a two-year hiatus due to the corona pandemic, Cyclonudista’s naked cyclists once again took to the streets of Brussels on Saturday evening as reported by BRUZZ. “We draw attention to the Brussels cyclist and to climate change,” says organiser Jérôme Jolibois. “A lot has changed in recent years, but there is still work to be done. And by cycling around naked, we want to normalise nudity at the same time.”

However, that also provoked negative reactions on Saturday evening around 5.30 pm. A dispute with bystanders arose on De Brouckèreplein. This confirms Ilse Van dekeere, spokeswoman for the Brussels-Capital-Ixelles police zone. “A team came to the scene for an incident on De Brouckèreplein, in which no injuries were reported.”

A local resident, who saw the incident, speaks of a “woman who started to shout hysterically to the naked cyclists, who had been holding a festive action on the square until then.” According to the eyewitness, there was some pushing and pulling and one of the participants would have been slapped in the face.

‘Unfortunate incident, we do not want to shock’

“After our intervention, peace quickly returned,” Van dekeere says. Organiser of the bike ride, Jérôme Jolibois, does not want to dramatise the facts. “There was a minor incident where a woman hit one of our cyclists and then other bystanders intervened. An unfortunate incident, but I want to emphasise that 99 percent of the people welcomed our initiative. We saw many smiling faces on our journey.”

“We don’t want to shock. We bring a peaceful message with respect. It is true that our cycling tour provokes a lot of reactions, but that is no different with manifestations.” The victim does not want to file a complaint for the time being.

Jolibois does criticise the Brussels police. “Normally, the police accompany us from start to finish, but from Schumanplein, the police left our procession. Unacceptable,” he says.

“We did follow the bike ride,” replies Ilse Van dekeere of the Brussels-Capital-Ixelles police zone. “In a discreet way.”

Cyclonudista took place for the sixteenth time, after a two-year interruption due to corona. The 2022 edition attracted about 150 participants, according to the organisation. The Brussels police counted about 40 nudists this time.