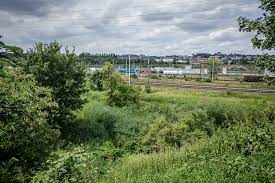 The Brussels government has reached a preliminary agreement with the NMBS about the leasehold of the nature reserve Het Moeraske, which is located between Evere, Schaerbeek and Haren. If the parties sign the agreement, the area would fall under a long lease from Brussels Environment for a period of 27 years. The idea is to better protect the status of the area – where many special plants grow.

This is apparent from the answer to an oral question from Mrs Cieltje Van Achter (N-VA) about green spaces in Brussels to competent minister Alain Maron (Ecolo) in the Environment Committee.

The Moeraske has been protected as a nature reserve since 1995. Thanks to the long lease it will be difficult to change the destination area. For example, contractors of the NMBS cannot accidentally dump a thousand cubic metres of sand into the nature reserve, as happened in 2007 said BRUZZ.

The Moeraske was created after the construction of the first railway in Belgium, between Brussels and Mechelen. This straightened the course of the Senne and its branches. A station was built in Schaerbeek and Haren, with a storm basin to the south. That area is now Het Moeraske.

Although the NMBS did not show itself to be the best owner of the area in 2007, the NMBS did save Het Moeraske in 1994 against the disappearance. At that time, Het Moeraske was threatened by the arrival of the TGV, but the Board of Directors of the NMBS agreed to lay the tracks at a sufficient distance from the nature reserve.

The proximity of the train has proved to be a great added value for the nature reserve. When the tracks were laid, the soil of the moist Senne valley was remediated. The combination of moist and dry areas proved to be good soil for all kinds of plants and flowers, including some rare species.

In addition to Het Moeraske, Maron also provides an update on other green spaces in the Brussels Region. For example, the renovation of the Stuivenberg greenhouses in Laeken will be completed by this summer. The application for an urban development permit for the Max aan de Zenne project in Noordwijk was also submitted on 1 March.