A taste of Croatian flavors of the diplomacy in Brussels 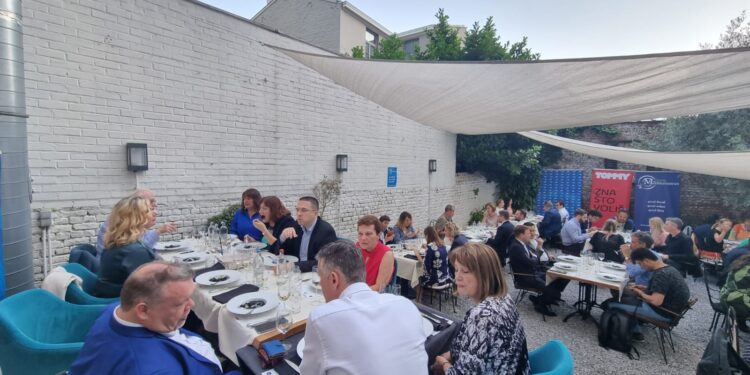 Belgium, (Brussels Morning Newspaper) Željana Zovko MEP, Vice-President of the EPP Group and a member of the Committee on Culture and Education, organized a presentation of the Taste the Mediterranean festival and the Gault & Millau with a gala dinner with the most famous dishes, drinks, and delicacies of Croatian gastronomy at the Maison’d Istrie restaurant in Brussels.

At an exclusive dinner, Croatian chefs from Zagreb, Istria, Dalmatia Vesna Miletić, Fabricio Vežnaver, and Zlatko Marinović prepared meals for members of the European Parliament, members of the European Commission, diplomats, journalists, and representatives of think tanks and NGOs. With their world-renowned culinary skills, these multi-award-winning chefs prepared top-quality dishes using fresh ingredients delivered from the Republic of Croatia, conveying a touch of Mediterranean atmosphere to all guests with the beauties, flavors, and aromas of Dalmatia and Istria. Prominent Croatian wines were served at the ceremony, and chef Marinović, prepared the traditional crunch of St. Duje.

As a reminder, Zovko, as part of the Committee on Culture and Education, is actively working to promote Croatia’s intangible and tangible natural, historical and cultural heritage in order to strengthen economic development and brand the Republic of Croatia as a desirable tourist destination with a sophisticated culture. With this in mind, she recently organized a presentation of the Split Festival at the European Parliament in Strasbourg, and since the beginning of her term in the European Parliament she has hosted presentations of various Croatian cities such as Trogir, Karlovac, and Solin, and Dalmatia and Istria as part of the 40th anniversary of the inscription of the first Croatian goods on the UNESCO World Heritage List.