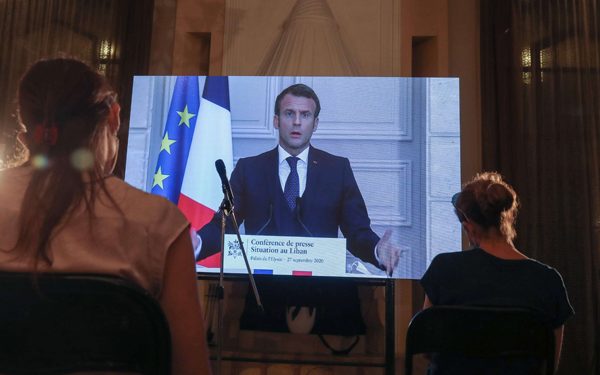 France’s President Emmanuel Macron criticized Lebanese faction leaders for what he described as their collective betrayal and failure to agree on a new, independent-minded government.

Blaming Hezbollah in particular, Macron said that if Lebanon is to benefit from French financial aid, it has four-to-six weeks to form a government of independents, RFI reported, Monday.

He warned that should the factions fail to reach an agreement by end October, France would hold a new aid conference with the UN. Humanitarian assistance would then be sent directly to the Lebanese people exclusively through NGOs operating in Lebanon and the UN.

Macron criticized Iran’s proxy in Lebanon, Hezbollah, one of the two Shia movements largely responsible for the failure to form the cabinet. Hezbollah should not overestimate its power, he cautioned, and, unlike recent days, should show its respect for all Lebanese.

A meeting of international officials is to be convened within 20 days, Macron announced, in order to review the conditions for providing support. Meantime, he urged Lebanese authorities to release the results of the investigation into the lethal 4 August explosion in the Port of Beirut.

Lebanon refused an independent international investigation but launched its own probe aided by international experts. This has resulted in 25 arrests, including leading port and customs officials.

Prime Minister-designate Mustapha Adib failed in his efforts to form a cabinet and stepped down on Saturday. President Michel Aoun has reaffirmed his support for France’s initiative, while noting the need to consult the parliament on the choice of Adib’s successor.

Carnegie Middle East Centre (CMEC) Director Maha Yahya predicted that the process will take quite a bit of time, an hiatus during which Lebanon will be left in the hands of a caretaker government without the authority to make impactful decisions. Lebanon, she stressed, is in desperate need of international aid and a government that can strike a deal with the International Monetary Fund (IMF) in order to jump-start its economy.

The spokesman for Iran’s Ministry of Foreign Affairs Abbas Mousavi said on Monday that Teheran is in contact with Paris and will support the French initiative providing it is  well-intentioned. Iran remains in touch with key factions and hopes a solution can be found, he added. Hezbollah head Hassan Nasrallah is due to make a speech later today.