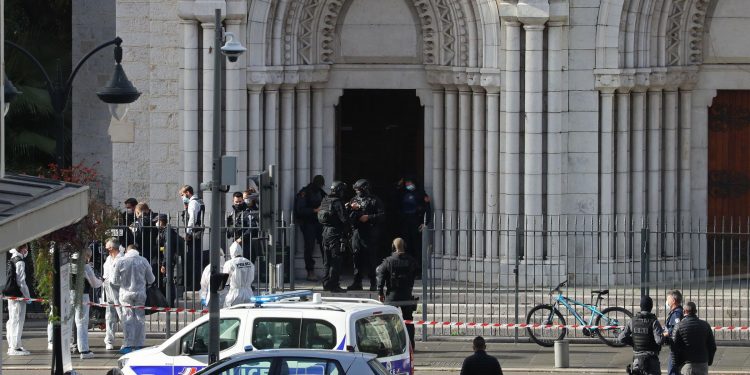 French members of the elite tactical police unit RAID enter to search the Basilica of Notre-Dame de Nice after a knife attack in Nice on October 29, 2020. - A man wielding a knife outside a church in the southern French city of Nice slit the throat of one person, leaving another dead and injured several others in an attack on Thursday morning, officials said. The suspected assailant was detained shortly afterwards, a police source said, while interior minister Gerald Darmanin said on Twitter that he had called a crisis meeting after the attack. (Photo by Valery HACHE / AFP) (Photo by VALERY HACHE/AFP via Getty Images)

Brussels (Brussels Morning) An Islamist knife attack left three dead in Nice, France, on Thursday. Mayor of Nice Christian Estrosi described the attack as an act of terrorism, Reuters reports. Estrosi pointed out that the attacker kept shouting the phrase Allahu akbar after he was detained following the attack in Nice’s Notre Dame church.

The Mayor demanded that Islamo-fascism be wiped out in France and noted how the victims had been killed in a horrible way, similar to those used against Samuel Paty, the school teacher slain in Paris. An police source said one of the three victims in Nice was decapitated, adding that several people were injured in the attack.

After Paty was killed, French officials and citizens reasserted their right to free expression, causing outrage in parts of the Muslim world and prompting some governments to accuse Fance’s President Emmanuel Macron of pursuing an anti-Islam agenda.

Following today’s attack, Prime Minister Jean Castex pointed out that France had raised its national security alert to the highest level and, according to DW reporting, Interior Minister Gérald Darmanin has announced a crisis meeting.

France’s anti-terrorism prosecutor has launched an investigation into the attack, which took place less than a kilometre from the site of the 2016 Bastille Day Islamist attack, when a truck ploughed into holiday crowd, killing 86 and wounding many more.

Also today, Thursday, police in Avignon shot and killed a person who threatened passers-by with a weapon and was shouting Allahu akbar In Jeddah, Saudi Arabia, a man wounded a guard at the French Consulate.

Two people were stabbed in Paris in late September this year near the former offices of the Charlie Hebdo satirical weekly, scene of the Islamists attack in 2015. A Pakistani male has been arrested in connection with last month’s attack, Reuters reported today, Thursday. In early October last year, a Muslim convert killed three police officers and one civilian employee in the Paris police headquarters.

A jihadist killed three people in the towns of Carcassonne and Trèbes in March 2018, shooting at police and screaming Allahu akbar. In July 2016, two jihadists killed a priest and wounded a hostage in Rouen before being shot and killed by police. At the time, then President François Hollande pointed out that the attackers had pledged allegiance to ISIL. The terrorist organization claimed responsibility for the attacks in November 2015, which left 130 dead and 368 wounded in Paris.