Weekly Review: An attack on antisemitism and Jeremy Corbyn 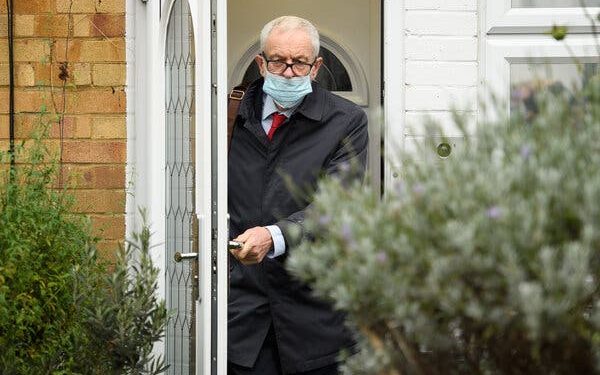 London (Brussels Morning) The Labour Party‘s long-standing battle around antisemitism reached a pivotal point yesterday as the country’s Equality and Human Rights Commission published its findings after an investigation into the party’s handling of complaints under the leadership of Jeremy Corbyn.

It noted there had been three breaches of the Equality Act 2010 that involved:

The first two breaches it said led to indirect discrimination against Jewish members, while political interference to speed up cases risked them not being handled with the care all complaints needed for an adequate outcome.

It was a 16-month long endeavour that became relevant soon after Corbyn’s leadership was realised.

The report never attributes personal blame to Corbyn but it does say there were serious failings in leadership.

The day was both dreaded and anticipated by the party’s now leader Keir Starmer. Wanting to accept the findings, draw a line underneath them and “move on”, he also called it a “day of shame”.

Alas, despite controlled communication instructions around the release of the report, the man whose reputation lay at the heart of it drafted his own response and broke with the prescribed protocol by acknowledging the disease that is antisemitism and its presence in the party but also said he did not accept all of the EHRC’s findings and said that inside and outside of the party, and in the media, its prevalence had been overstated.

Then came war. The Labour Party, not Keir Starmer, suspended the MP for Islington North; the news was delivered to the 71-year-old veteran politician by a news reporter as he walked outside his door. He vowed to fight his suspension.

What has followed is an outpouring that suggests the issue has far from a line underneath it, unless we’re talking battle lines.

What will follow will be messy. The media commentary following the report and suspension has been wide but has been broadly saying the same thing, which is first and foremost, solidarity with Jewish Labour members at the brunt of abuse and who have had to endure almost certainly triggering debates play out around them.

The second thing they have done is, in unison, applauded the suspension of Corbyn, who few, if any, have called an antisemite. It would be hard, considering his record fighting racism and bigotry, the majority of which has been on the back-benches, to add to the political discourse in the lower chamber.

The social media fallout is a different story, with outpourings of support for the Bennite and a legal crowdfunder racking up over £300,000 in donations.

There may be more to come after a period of consideration for the Jewish community, but so far, the alternative view has come from Peter Oborne and Richard Sanders in Middle East Eye, who question the veracity of the EHRC report itself, pointing out:

“for two-thirds of the period under investigation by the EHRC, Labour HQ and the complaints procedure were under the control of individuals not just resistant to the authority of the leadership but, allegedly, working actively to undermine it”.

Throughout his leadership, Corbyn has faced fierce opposition, not just from the government but from within his party and the media. They have condemned his associations, his old Labour commitment and sometimes his age.

His wide unpopularity was evident in the last election, and since yesterday’s decision, Labour is leading five points ahead of the Tories, according to Ipsos Mori. A YouGov poll has shown that 58 percent of the British public agree with his suspension (41 percent of Labour voters think it was the right decision).

In the long-term, however, this could work against the Labour Party as Corbyn still has a strong base of supporters who are feeling disenfranchised and are only expecting more carnage as the Party has been urged to remove even more MPs of Corbyn’s stock. This purge will dilute the political discourse within the Labour Party, cause more factions while diverting votes.

It may, in fact, work to the Conservative Party’s benefit.