EuroPride march in Belgrade to be held despite official ban 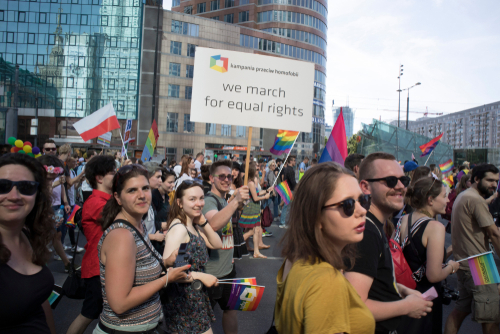 Belgium (Brussels Morning Newspaper) Even though Serbian President Aleksandar Vučić announced a ban on the planned EuroPride march which was to take place in Belgrade on Saturday, the event’s organisers have stated that they have no intention of backing down, and that the march will take place regardless of the ban.

Vučić originally called in August for the EuroPride parade in Belgrade to be cancelled. While the EuroPride itself is to take place over several days, the march through Serbia’s capital is the centrepiece of the pan-European LGBTQ+ event planned for three years in advance.

Even though the Serbian president does not legally wield executive power, and cannot issue such an order himself, political analysts widely agree that Vučić is the de facto head of government, wielding power over his ruling party and the Prime Minister he installed, Ana Brnabić.

His announcement of ban for the event started a long period of uncertainty, as the international organisers, backed by most European LGBTQ and human rights groups, received no formal notice that the event would be banned, nor was it clear how could it be banned in the first place, as Serbian constitution allows for peaceful protests and assemblies.

However, as this uncertainty was growing, far-right elements within Serbia grew louder in calling for the protest to be banned, organising two weekend protests against “sodomisation of Serbia”. Organized by the far-right “Dveri” movement, the protest marches in Belgrade prominently featured pictures of Serbian religious figures, WWII nazi collaborator and war criminal Draža Mihajlović, and Vladimir Putin.

Dveri announced and requested permission from the Serbian police to hold a counter-protest on the upcoming Sunday, as well, which was eventually used by the Interior Ministry as an excuse to ban the planned route of the EuroPride march. Even though standard police practice in cases when two events are scheduled for the same day was to grant permission to the one which first sent the request, Serbian Interior Ministry strangely decided to ban the EuroPride and allow the anti-EuroPride protest.

“The EU is disappointed to learn that the Ministry of the Interior issued a ban on the route of the march,” said European Union External Action Service spokesman Peter Stano in a release. “It is a public expression of the will to fight discrimination and promote equal rights of LGBTIQ+ persons and the most visible part of the Europride. There cannot be a Europride without the march,” said Stano, adding that the EU “expresses hope that a solution will be found before Saturday”.

Council of Europe Commissioner for Human Rights Dunja Mijatović also expressed regret over the ban. “Weeks of uncertainty concerning the holding of this march have sent the wrong message to the public and made space for hateful rhetoric and more threats against LGBTI people, including from religious leaders,” stressed Mijatović. “I find it highly concerning that the Europride march is facing such a level of obstruction from the authorities, while other events and massive gatherings are constantly taking place freely and safely in the streets of Belgrade.”

In an official statement, the Commissioner noted that the European Court of Human Rights (ECHR) regularly ruled in similar cases that states have the obligation to take preventive measures to neutralise risks of violence against an assembly and must ensure the security of participants, but also to ensure that the time, place and manner of conduct of an assembly must allow the participants to convey their message within range of target audience.

“Instead of bowing to threats and hate by banning the Europride march, the Serbian authorities have the responsibility to ensure that everyone in society can exercise their right to enjoy the same freedoms and is equal in dignity,” said Mijatović.

The EuroPride event was hailed by the EU and western governments as a sign that minority rights in Serbia are improving, and was widely backed by European and western countries. According to the event’s organiser, Goran Miletić, none of the western diplomats accredited in Serbia who pledged to attend have cancelled their plans to attend so far.

Miletić also commented for Brussels Morning on the police decision to ban the EuroPride yet grant permission to the counter-protest. “These are tried-and-true methods of the Serbian Interior Ministry to ban all events non-selectively,” said Miletić. “They are presenting as equal both peaceful protests and counter-protest aiming to curb human rights. Their official reason is the danger of conflict between the two protests, even though pride participants never attacked anyone,” explained Miletić.