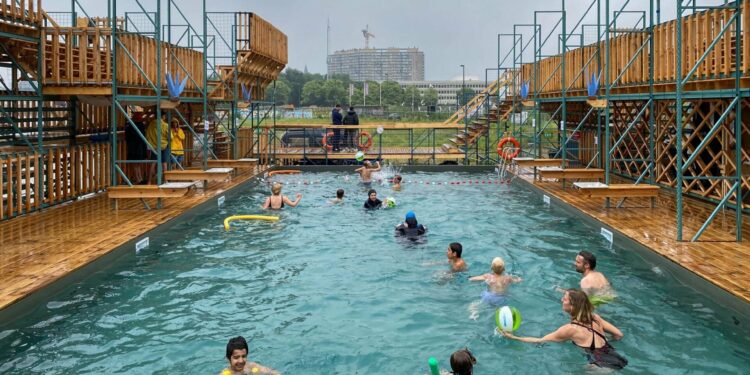 Brussels, (Brussels Morning)-  The City of Brussels is still not one step closer to the promised open-air swimming pool. “And that while young people are looking for coolness in the most polluted part of the canal,” says Pool’s Cool inspirer Paul Steinbrück.

The images of the children jumping into the polluted canal water at Sainctelette have moved the organisers of Pool is Cool. “This place may have the worst water quality of the entire canal in Brussels. But who can blame them for seeking refreshment on the hottest day of the year?”

“Isn’t it time to ask the City of Brussels what will actually happen with the plans for an outdoor swimming pool?”, writes Pool is Cool inspirer Paul Steinbrück on Facebook.

Not too much, as it turns out. “There is no news. We have to take up the study again and work on it further,” says Els Wauters, spokesman for the Brussels alderman for Sport Benoit Hellings (Ecolo). “Which location can be used in what period, and who pays what. Those are the questions that still need to be answered.”

However, the cabinet recognizes the need for a place to swim in the open air. The government blames Covid for the fact that there is still no news two years after the study was published. “We then bet on the indoor swimming pools,” it sounds. For example, the opening hours were extended, a question that dates back to 2019.

Want to push on

Paul Steinbrück, founder of Pool is Cool, regrets that the outdoor swimming pool has not come a step closer in the meantime. “We are obviously disappointed,” he says. “It is true that there has been Covid, but other projects such as outdoor swimming in Neerpede or the swimming pool at Abattoir have made progress. While these are much more difficult files with more involved partners. much easier. As long as the will is there to push through.”

The City of Brussels cannot provide a concrete timeline for the further follow-up of this file. However, let it be known that it is mainly a financial issue. “We are only one municipality and cannot bear all the costs for such a swimming pool,” says Wauters. “We would therefore like the Region to contribute.”

Whether the swimming pool will be realised by 2024, a promise from the City of Brussels, is still unclear. Paul Steinbrück has meanwhile announced that the open-air swimming pool Flow will open on 1 July.