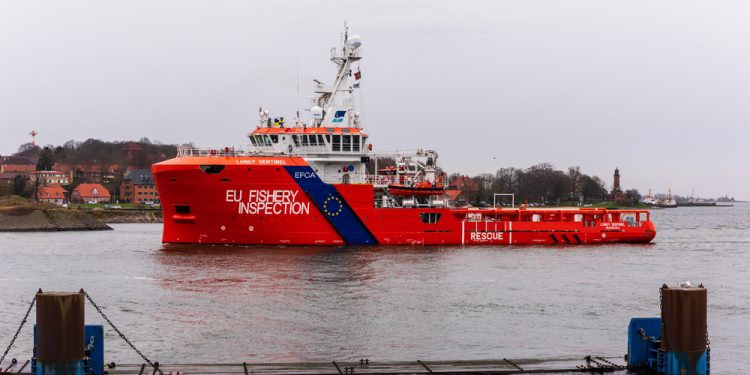 The EU's Lundy Sentinel fishing protection ship is due to sail in Kiel. The journey goes over the Holtenau lock through the Kiel Canal into the North Sea

Brussels (Brussels Morning) EU action has not contributed to the recovery of seas and marine habitats, reveals the European Court of Auditors (ECA) report, published today.

Practices like overfishing and EU funding programmes are not addressing the core problems related to the marine environment, it says.

“Due to their economic, social and environmental importance, seas are a real treasure. However, EU action has so far been unable to restore European seas to good environmental status, nor fishing to sustainable levels”, said João Figueiredo, the Member of the ECA responsible for the report.

The EU auditors insist that the current legislative framework is “not deep enough” to restore EU seas to decent environmental standards. The ECA also found that EU funds “rarely support the conservation of marine species and habitats”.

According to EU marine law, there are more than 3,000 Marine Protected Areas (MPAs), yet the EU auditors’ assessment has concluded that they provide “limited real protection”.

Asked to comment on the ECA’s report, the European Commission told Brussels Morning that despite the achievements over the last years, the EU executive recognises that there is room for improvement and that they will heed the ECA’s advise.

“European and national policymakers should read today’s analysis by the European Court of Auditors as an urgent call to action for better implementation of EU environmental and fisheries policies”, said Andrea Ripol, Fisheries Policy Officer at Seas At Risk.

Andrea Ripol described the ECA’s report as a “wake up call” pointing out the exposure that common dolphins suffer in the Bay of Biscay, as a result of bycatch fisheries.

Issues like overfishing, which have a considerable impact on marine environment, are persistent and require real attention too, the ECA points out.

The critical area is the Mediterranean Sea, where the common fisheries policy has shown no signs of progress. EU auditors say that fisheries in that sea are exceeding sustainable levels.

Recently, the European Environment Agency reported that only 6 percent of assessed stocks in the Mediterranean are in line with ‘maximum sustainable yield’ criteria.

“The Commission will publish in 2021 an action plan on the conservation of fisheries resources and protection of marine eco-systems as a follow up to the recent Biodiversity Strategy”, Commission’s spokesperson Vivian Loonela told Brussels Morning.

The Commission said it was important to recognise that other elements contribute to the alteration of marine environment including “pollution, sea floor damage from other economic activities, and the spread of non-indigenous species”.

The EU executive further added that “member states have an important responsibility improving implementation of the Common Fisheries Policy (CFP)” and that they will work closely with EU countries to report on the functioning of the CFP.

In its report, the ECA identifies how key EU policies and funding programmes try to address marine biodiversity and habitat loss, particularly in areas of the Atlantic Ocean and the Mediterranean Sea.

Their findings revealed that for the 2014-2020 period, about 6 billion euros were allocated to the European Maritime and Fisheries Fund (EMFF).

However, the EU auditors estimated that, across the four member states they visited – Spain, France, Italy and Portugal — only 6 percent of the budget was allocated for measures dealing with conservation and a further 8 percent for measures with a less direct impact on conservation.

Yet, the ECA pointed out that EU funding can make a difference, reflected in good examples including the EU’s LIFE and the Interreg programmes.

The ECA audit covered a 12-year lifespan, from 2008 – the year the Marine Strategy Framework Directive was adopted – until March 2020. It focused on the Bay of Biscay and the Iberian Coast, Macaronesia and the Western Mediterranean Sea.

The Commission said it will soon look at the implementation report of the Marine Strategy Framework Directive adopted in June 2020 and start the evaluation of the legislation.

“Using the findings of this Court of Auditors’ report, we will further analyse and address the shortcomings, having in mind the broader European Green Deal objectives”, said the Commission’s spokesperson.

In 2021, the high-profile Conference of Parties to the Convention on Biodiversity will gather policy makers to further discuss environmental matters. The ECA audit report will likely feed into the discussion and pave the way for improved action.