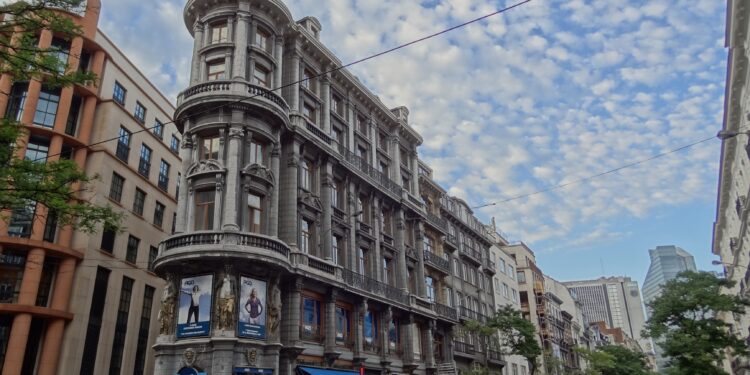 Brussels, (Brussels Morning)- The Brussels Region grants a building permit to the City of Brussels for the complete reconstruction of the Adolphe Maxlaan, which connects the De Brouckèreplein with the Rogierplein, and the surrounding streets. The Adolphe Maxlaan will be completely redeveloped in the same style as the Anspachlaan.

The Adolphe Maxlaan will be built on one level from facade to facade to emphasise that it is a residential area . The style of the street furniture of the pedestrian zone, such as street lighting and bicycle staples, will be continued, said BRUZZ.

The space for the car is reduced, there are many new trees and wide footpaths in bluestone. In addition to Adolphe Maxlaan, Mechelsestraat, Bridal Street, Finisterraestraat, Nieuwbrug and Sint-Pietersstraat will also be redeveloped.

“The Adolphe Maxlaan is absolutely in need of renewal,” says competent alderman for Urbanism and Public Space Ans Persoons (One.brussels-Vooruit). “Not only does the excessive space that the current construction allocates to cars appear outdated, the trees in containers also date from another century.”

“We provide a wide variety of green forms: tall and multi-stem trees, perennials, ornamental grasses and flower bulbs. The avenue will look different every season. We hope that the project will give a new impulse to local trade and that Brussels residents will rediscover this prestigious street and its remarkable heritage.”

The new avenue will visually connect the pedestrian zone with the North Quarter, adds Brussels State Secretary for Urban Planning Pascal Smet (One.brussels-Vooruit). “Another strategic zone that we are fully upgrading.”

It is not yet known when the work will start exactly. “This week, the Brussels administration is meeting with the contractors and it will be considered when the works can start,” said the Persoons spokesperson.

“We already know that the site will be divided into two zones and that the works will take place in two phases of 200 working days each,” it sounds. “We will inform the neighbourhood and the traders in a timely manner and try to alleviate the inconveniences as much as possible.”