De Brouckèreplein: successor Brouck’R has to do without a roof hotel 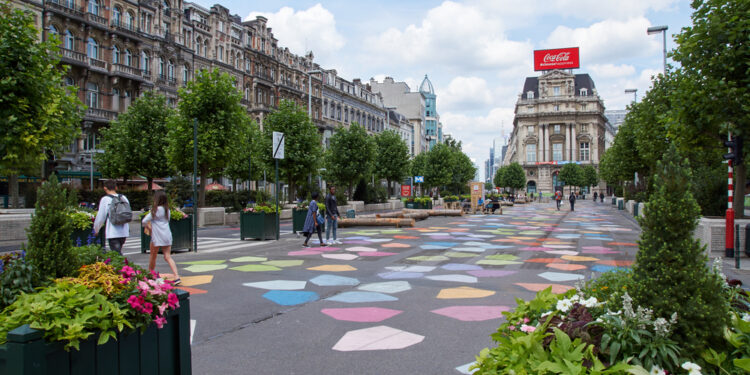 Brussels, (Brussels Morning)-  The Brussels Region is introducing new conditions for the building plans on Place De Brouckère. This had to be done after the Council of State had annulled the permit for the previous Brouck’R project. The most important adjustment is on the roof: the controversial extra floor will not be built.

This is reported by the cabinet of State Secretary for Urban Planning Pascal Smet (one.brussels-Vooruit). The Brouck’R project concerns the building block between De Brouckèreplein and Lakensestraat, with the exception of the UGC cinema. Behind the historic facades, developers Immobel and BPI want to build 180 homes, a hotel and student accommodation. Demolition has already started and is almost complete, but in April  the Council of State suspended the permit for the project. According to her, this was insufficiently motivated by the Brussels Region. Since then, the works have come to a standstill.

Meanwhile, behind the propped facades, there is a bare plain in the centre of the city. To avoid deadlock and lengthy procedures at the Council of State, Smet now decides to revoke the permit himself. He immediately imposes additional conditions on the construction promoters for a follow-up project. The requirements mainly concern the roof, his cabinet clarifies. “The volume on the roof must disappear,” says spokesman Damiaan De Jonge, as reported by BRUZZ.

By that volume, the cabinet means an extra floor on top of the old Allianz building, at numbers 12 to 30 of De Brouckèreplein. In the previous plans there was room for hotel rooms. A thorn in the side of city associations and already a point of discussion in the permit procedure. “During the entire permit procedure, we emphasised the advantages and disadvantages of that extra volume,” says De Jonge. The disadvantage, which local residents also feared, was the impact on the view of the square. According to Pascal Smet, the advantage, which ultimately proved decisive, was in the extra space that this created in the densely populated city.

But that extra space to live or spend the night will no longer be available. The Region asks the promoters for a classic, pitched roof while retaining the historic dormer windows along the front facade. It is now up to Immobel and BPI to submit a new design together. That is not there today. The promoters were unable to comment further on Monday.

It remains to be seen whether Brouck’R will make way for a hotel, now that the planned volume for it is disappearing. “Even without that roof floor, an extra hotel in the city centre is pointless. The existing hotels are not getting fully booked yet,” says Mohamed Benzaouia of Inter-Environnement Bruxelles (IEB), one of the associations that objected to the previous project. “The government should frame large construction projects, not just leave them to the market logic of promoters. We are asking for a project with an eye for the neighbourhood and habitability.”

Not only was the hotel a point of discussion for IEB and other city associations, but so was the impact on the heritage. The Royal Commission for Monuments and Landscapes (KCML) previously called the demolition a “total destruction” and gave negative advice for the permit. However, the Region does not now set any further requirements for the demolition works. They are already “virtually round”, says Smet’s spokesperson.

From the City of Brussels, Alderman of Urban Planning Ans Persoons (Vooruit) joins the Region. “We absolutely want to avoid that the site in the heart of our city remains a wasteland for a long time. We look forward to Immobel’s proposal,” concludes Persoons. If that proposal comes up in time, the new public inquiry could start after the summer.