A journey with no return: Cruces en el desierto 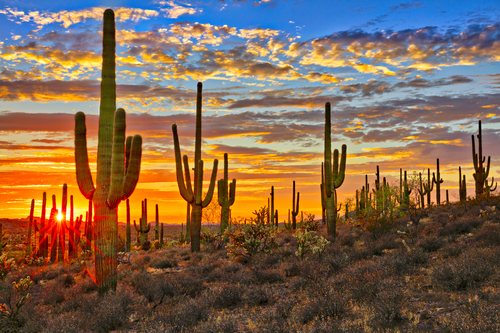 Sunset in Sonoran Desert, near Phoenix.

Serena Pacchiani reviews a podcast about “ghost migrants” crossing the Sonoran Desert between Mexico and the US.

Rome (Brussels Morning – 2duerighe) With lockdowns and the unappealing winter weather outside, it’s cathartic to fantasise and plan new trips for when the outside world becomes more accessible.

There are a lot of blogs on the topic but one that has really grabbed attention is on the wild and fascinating Sonoran Desert, also known as the Gila Desert.

The Sonoran Desert, between exotic escape and nightmare

The webpage’s author calls it “a desert ecoregion of the Nearctic ecozone, located on the western side of the border between the United States of America and Mexico. Covering some 311,000 km², it is one of the hottest deserts in North America, and includes the states of Arizona, California and the Mexican region of Sonora, home to Native American tribes”.

He also says it is an enchanting destination to discover breath-taking landscapes, ancient cultures and irresistible flavours. He then recommends simple but fairly essential equipment to make the exotic adventure a little easier: a map, some English and Spanish language skills, a hat, sunglasses, a sunscreen cream, and, obviously, lots and lots of water.

If that has caught your attention, the internet has some other offerings on the Sonoran Desert and one that is particularly shouting out is a podcast by radio producers Martín Cruz and Catalina May, and journalist Dennis Maxwell.

The podcast is a mini series of the humanitarian crisis on the border between Mexico and the US. The creators caution, it contains strong testimonies.

Therefore, don’t expect an adventurous travelogue from the Sonoran Desert with this podcast. The indirect protagonists are not there to discover breathtaking landscapes, ancient cultures or irresistible flavours. They don’t have a map and frequently get lost. They speak few languages and are hindered by lack of communications. They may not wear hats, sunglasses, or necessarily own sun cream protection. The only water readily available are tears, which they shed in desperate please to American rescue services to save them from certain death.

They frequently “travel” alone, sometimes in small groups that soon disperse or fall behind, due to the extreme difficulty of the journey, hunger, thirst, fatigue, police raids or the near-death wounds of snakes and cactus’ spines. They are the phantom migrants, those who seek alternative ways of crossing borders and entering the US illegally from South America. These are borders that have become increasingly inaccessible due to now ex-president Donald Trump who, as the New York Times revealed a few years ago, ruminated on armouring frontiers with a “natural” ecosystem of alligators and ferocious beasts.

Dennis Maxwell, along with humanitarian groups, took the journey and reported it in an extremely engaging episode called Cruces en el desierto as part of a podcast of equally exceptional variety, intelligence and perspicacity, Las Raras. The episode, from which the title is borrowed, is enlightened by the presence of Álvaro Enciso, a former Vietnam veteran, now artist-craftsman lending himself to the cause of migrants. Accustomed to death, he has never gotten used to the idea that in the last 20 years, since he began frequently crossing this desert area, he has encountered more than 3,000 corpses, about half of which are unidentified or unidentifiable. That is why, exhibiting fearlessness and tenacity, he regularly travels through the migrants’ steps, planting wood crosses in the Sonoran Desert. Even more tenaciously, he consistently replants them, always in the same places even though, he says, they disappear at the hands of so-called “defenders of the homeland” who boycott the already perilous crossing of the migrants; the same individuals sabotaging water supplies made available at strategic points.

Following Álvaro’s footsteps and life, the story commemorates these migrants against a backdrop of a lacerated America, humanly and physically, deserted and desertified.

Cruces en el Desierto is a powerful and engaging journalistic investigation, but above all a journey across humanity, inhabited by artfully and sophisticated soundscape editing, in which the constant presence of these “desaparecidos” is exposed. A faithful Spanish transcript and skillfully constructed acoustic overlap make it easy listening.

Deservedly awarded as one of the best productions of the year and recently presented in Florence at Lucia, one of the most inspiring international festivals around radio productions, Cruces en el Desierto lets us reflect, through an auditory evasion on Sonora.

Tags: between the linesMain-SliderSunset in Sonoran Desert
No Result
View All Result