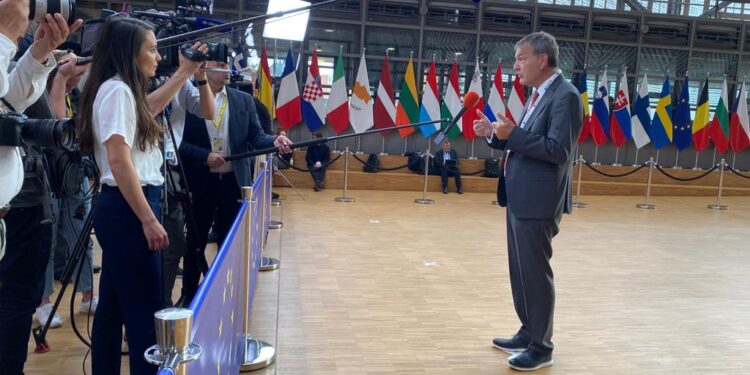 UNRWA Commissioner-General Philippe Lazzarini addresses the press at the Brussels IV Conference on 'Supporting the future of Syria and the region'. © 2022 UNRWA Photo by Estefania Diaz

There are nearly 440,000 Palestinian refugees who still live in Syria and 50,000 between Jordan and Lebanon, having fled the conflict in search of safety. Almost all of them live under the poverty line and face immense daily challenges, including difficult access to sufficient food to feed themselves and their families. Most of them live on less than US$ 2 per day.

UNRWA Commissioner-General Philippe Lazzarini said: “The Palestine refugees in Syria live in very dire conditions. After 11 years of conflict, some have returned to their destroyed homes because they can no longer afford to rent outside. These refugees need schools, clinics, and social protection.”

Since the start of the conflict, many UNRWA installations inside Syria, such as schools and health centers, have either been totally destroyed or sustained severe damage. Forty percent of UNRWA classrooms were lost and almost 25 percent of the Agency’s health centers are currently unusable. UNRWA in Syria has also lost 19 staff members during the 11-year conflict.

Director of UNRWA Affairs in Syria Amanya Michael-Ebye stated: “Some 1200 families have returned to Yarmouk; they live amidst the rubble and possibly around unexploded devices, in very dire conditions. Eleven years of conflict, displacement, soaring inflation, loss of livelihoods, and now two years of COVID-19 all make their life untenable. UNRWA assistance to Palestine refugees in Syria and in neighboring countries is often their only lifeline and their last source of support. The financial challenges that UNRWA faces restrict our ability to truly respond to the needs. Our staff is under tremendous pressure to deliver critical services, with restricted resources,” Amanya added.

This year, UNRWA requires US$ 365 million to secure emergency humanitarian assistance to Palestine refugees affected by the conflict in Syria, Lebanon, and Jordan through its Syria Regional Crisis Emergency Appeal. Palestine refugees in Syria and those who fled the conflict to Jordan and Lebanon rely entirely on the Agency’s services to survive their continued displacement. As of now, the appeal remains significantly underfunded.

“Palestine refugees in Syria, and those who fled to Lebanon and Jordan, rely entirely on UNRWA to cover their humanitarian needs and to access education and health care,” said Mr. Lazzarini. “Like anyone else, it is their right to have education and health care. As this annual conference brings together all those who support the humanitarian response to the Syrian crisis, this is a reminder that Palestine refugees must be included in the response at all times.”