Appeal against the reconstruction of the Schuman roundabout continues 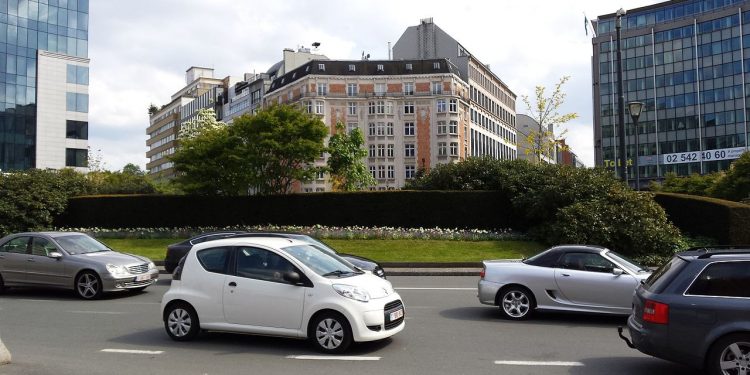 Brussels (Brussels Morning) – Several neighbourhood committees and traders from the European quarter are asking the Council of State to cancel the building permit for the Schuman roundabout. They find the planned awning too expensive and bombastic and fear that the square is not attuned to the future of the district. An agreement was recently reached on the plans between the Region and the municipality of Etterbeek.

This article first appeared in the newspaper La DH on Sunday and is confirmed to Brussels Morning by the neighbourhood committees.

At the end of last year, the plan for the reconstruction of the Schuman roundabout received a building permit from the Brussels Region. Etterbeek’s mayor Vincent De Wolf (MR) first wanted to appeal against this, but was then able to reach an agreement with the Region. The Blijde Inkomstlaan will remain a two-way street due to his intervention. That point is not to the liking of some local residents, who would rather have kept the Blijde Inkomstlaan in one direction, but their grievances are about more than that.

“The reconstruction of the Schuman roundabout is a complex project, so different people have different points of criticism,” Barbara Bentein of the GAQ neighbourhood committee from the European quarter told BRUZZ. Together with the AQL district committee from the Leopold district and the trade association Jean Monnet, the committee has united under the new ‘Schuman collective’.

“The vast majority of residents are clearly not in favour of that ‘monument’, which already costs millions and is in a crisis situation,” says Bentein. She refers to the planned, futuristic canopy on the roundabout. It has been criticised before. According to the local residents, the canopy would disrupt the view of the Cinquantenaire Park and offer less space for meetings and events.

The Schuman collective is now going to the Council of State with the request to annul the granted building permit. “We have been trying to draw attention to the plans for years and we have asked a list of questions during the consultation committee, but they have not been answered sufficiently,” says Bentein.

Connection to the district

In addition to the awning, the neighbourhood committees also disagree with the changed traffic situation around the Schuman roundabout. They fear more traffic jams and car pressure in the Steenweg op Etterbeek, and also around the Cinquantenaire Park because the Blijde Inkomstlaan now remains in two directions.

“Suppliers and customers of shops around Place Jean Monnet, Place Jourdan and Jachtwijk will experience great difficulties in traffic and will have to make long detours. The traders don’t feel like it, especially in the aftermath of the pandemic,” adds Jean-Pierre Brouhon of the trade committee Jean Monnet.