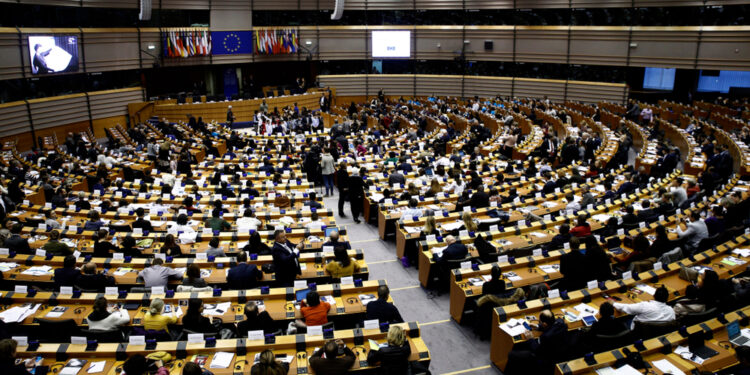 Brussels, (Brussels Morning)- The European Parliament has chosen a winning sketch for the renovation of their building in Brussels. In that case, the choice is still for renovation, not for new construction. The Danish office JDS Architects opted for a preservation of the existing structure and a slight extension of the Leopold Park. That doesn’t mean the renovation is over right away.

This is what La Capitale writes and the Brussels master builder Kristiaan Borret confirms to BRUZZ. Borrett was a member of the jury in the architectural competition, but was not otherwise involved in the call for projects . It had been written out by the European Parliament itself, two and a half years ago.

The winning (sketch) design by JDS Architects will not be presented until September. Master builder Kristiaan Borret already reveals that the elliptical structure of the parliament building will be preserved. “I thought that was one of the great assets of this design. There is a fundamental reuse of the structure. At the same time, the urban planning situation around the building is being improved,” says Borret.

For example, there will be a new walking route between Place du Luxembourg and Leopold Park, he says. The esplanade, which is now somewhat enclosed between the parliament building and Luxembourg square, would thus better connect with the city. The current plinth of the Spaakgebouw will also be reduced in size, which will slightly enlarge the Leopold Park.

It is now a sketch that can still be modified. The plans must then be approved by both the European Parliament and the Brussels government, with all the associated procedures.

“This was just a design competition, which has now ended. Should parliament go ahead with the renewal plans, it must first negotiate with the winner,” said European Parliament spokeswoman Delphine Colard. “At this point, that decision has not yet been made. We don’t know yet if we will continue, in what form and there is no timing yet.”

The budget also remains unclear. When the architectural competition was launched , the European Parliament still thought that a new building would be cheaper than a renovation. “That doesn’t necessarily have to be right,” says master builder Borrett. With the choice of this design, a new building already seems off the table.

The architects therefore receive no certainty about the execution of their plans. JDS will receive 120,000 euros in prize money. The office has offices in Copenhagen and Brussels and was founded by the Brussels architect Julien De Smedt. The top five of the winning designs also includes a Brussels agency, A2M. They receive 40,000 euros for their fifth place. All five designs will be exhibited in September on the central esplanade in front of the Paul-Henri Spaak building.

That building is only thirty years old, but it was already struggling with water leaks and problems with the roof. Safety regulations are also stricter today. “The building does indeed need to be renovated, but it is still functioning,” says parliament spokeswoman Colard. There doesn’t seem to be much rush for the renovation. “This will take years,” says master builder Borrett.