by BrusselsMorning
in Brussels, Parliament 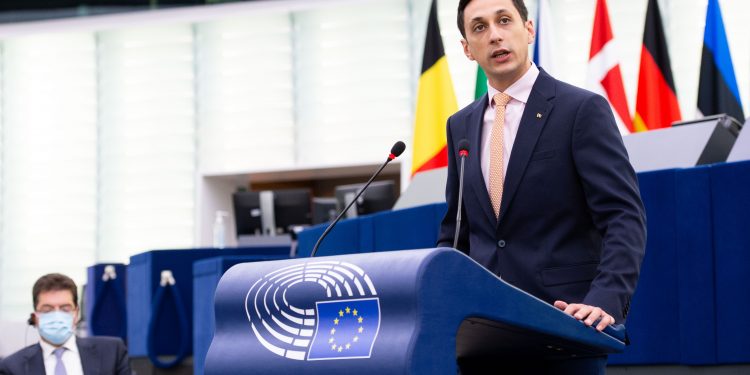 During the last two weeks, Member of the European Parliament Vlad Gheorghe (USR, Romania) has launched a series of initiatives in order to help Ukrainians to survive and counteract Russian aggression. He launched a group of volunteers who successfully help Ukrainian refugees to find transport, shelter, humanitarian aid and food in Romania. https://www.facebook.com/groups/unitipentruucraina

Apart from that, he concentrated his efforts on coordinated border policy, in order to avoid situations like in Hajdú-Bihar in Hungary where the refugees were stopped at the border. He also called for a team of international experts, with the participation of the International Atomic Energy Agency, to guarantee the monitoring and safety of Chernobyl nuclear plant which was overtaken by Russian troops.

One of his latest initiatives aims to bring justice to Ukrainians by financing their humanitarian and military needs with the use of Rebuild Ukraine Fund – a fund partially alimented by the recovered frozen assets which belong to Russian oligarchs and individuals belonging to Putin’s inner circle sanctioned as a result of Russia’s invasion in Ukraine. Primarily it would serve the rebuilding of Ukrainian infrastructure and economy, heavily damaged by Russian invasion. In the opinion of Mr Gheorghe, EU should channel the sanctioned assets to finance Ukraine in this period when it makes every effort to fight for its independency, sovereignty and territorial integrity.

Here below is the letter Mr Gheorghe forwarded to Ursula von der Leyen two days ago. He expects a rapid consideration of this initiative by the Commission.

Russia’s war on Ukraine which started on February 24, has already brought immense devastation in terms of human losses and economic crisis. The economic consequences of Russian invasion are expected to become more catastrophic with every day as the war goes on. You announced a perspective of the EU membership for Ukraine, a very welcome decision which will see Ukraine as a sovereign and free state inside the European family. In this regard, I call on you to establish a Rebuild Ukraine Fund, a fund which will be composed partially from the EU resources and partially with the resources recovered from the assets of Russian citizens who have been targeted by the EU sanctions and whose assets have been frozen. Therefore, I suggest a creation of a centralised registry with the information on financial assets and property ownership assets currently frozen in the European banks. These assets should be put at the disposal of Ukrainian government upon request in order to rebuild the infrastructure, including strategic medical, transport, energy and military structures, to accelerate Ukraine’s recovery and limit the spread of economic crisis. Russia bears the full responsibility for the destruction of Ukrainian economy, it should therefore also bear the full cost of its recovery. Considering that there is no viable solution to recover the reconstruction funds from Russia directly, these resources should be taken from the frozen assets of oligarchs and the individuals belonging to Putin’s inner circle who placed their belongings in the European financial institutions and who actively or passively contributed to the Putin-led aggression in Ukraine.
Rebuild Ukraine Fund with the use of frozen assets is a way to compensate efficiently and quickly for the economic losses in Ukraine. It is a way to realise some of the demands of the European Parliament resolution of 1 March 2022 on the Russian aggression against Ukraine (2022/2564(RSP)), particularly its paragraph 35. Moreover, it is a way to bring justice to Ukrainians, brave and courageous people who bear the heaviest possible cost of Putin’s war crimes.
We rely on your careful consideration.
Best regards,
Vlad Gheorghe MEP, USR, Romania

Here is the letter in PDF format