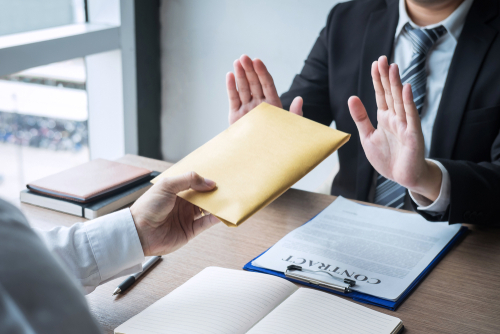 Greece, (Brussels Morning Newspaper) Corruption is on the rise in the European Union, cases of lack of transparency are increasing on a daily basis, and governments are constantly challenging the Rule of Law, threatening the EU’s foundations.

Fighting corruption is a difficult task in the absence of a clean policy developed by the Commission. According to Transparency International, the fight against corruption has stalled over the last decade, despite human rights violations and democratic declines in all regions of the world.

In recent years, Greece has been hit with a slew of political and other scandals involving corruption, nepotism, and fraud. Despite being plagued by institutionalized corruption for decades, the country has recently refused to introduce the very limited mechanisms that would safeguard the state itself.

Brussels Morning, in a long discussion with Mr. Kostas Arvanitis, a Greek politician currently serving as a Member of the European Parliament for the Coalition of the Radical Left, presents major scandals and violations of the rule of rule that threaten the Greek and the European transparency. Mr. Arvanitis is a member of the Committee on Civil Liberties, Justice and Home Affairs and the Delegation to the EU-Russia Parliamentary Cooperation Committee.

AK: Serious concerns persist in Greece regarding rule of law violations. What is the current situation in the country?

KA: It’s certainly not good! Of course, the Rule of Law in Greece is still a ways from a Visegrad-like collapse, -Hungary and Poland spring to mind- but is still significantly endangered by the practices of the Mitsotakis government. A supposedly European-minded government, preoccupied with projecting a moderate conservative image, well within the norms of the EPP’s European center Right, of a normal government. But it is not! Judged on its actions, the Mitsotakis government comes off more like a Balkan chapter of Visegrad. It began with the refugee issue and the adoption of a “deterrence policy,” it continued with mincing words about alleged illegal pushbacks and is now culminating into an unprecedented attack on Justice and investigative journalism. There were early warning signs of extreme right policies in sectors such as Labour, but those of us who called them out as such were accused of being… anti-greek, while the European Leadership did its best to try and turn a blind eye to numerous unconstitutional practices. But now the allegations regarding the country’s border situation have mounted, the wound in the Justice system has surfaced and investigative journalists find themselves accused of criminal activity! This is starting to be a concern for conservative citizens as well, as it is for most involved with Greek public life. I say that it is more than mere concern. By now they are terrified of the monster they have nurtured by tolerating the practices of the Mitsotakis’ Right. A Right that, even though elected for its supposed Europeanist orientation, has become the government that has historically least respected EU fundamental principles in 40 years of Greek EU membership! And as if that was not enough, recently, another shady affair has recently come to light, regarding the surveillance of a journalist researching stories of international interest, regarding the Greek banking system.

AK: Why does Greece have so few public cases of whistleblowing?

KA: It is because the Greek political system, that led the country to financial ruin in 2010, and brought about the catastrophic spiral of neoliberal memoranda, is not a fan of whistleblowers and the robust protection systems they need in order to speak for the public interest. Take the Novartis case for example. Beyond the outrageous case of the prosecution of the prosecutor who handled the case, as well as that of the journalists who revealed elements of the case, there was also the constant targeting of whistleblowers. Be it by public bullying or they are being dubbed “hood wearing criminals” by high profile government members or outright threats of “removing the hoods,” or even manipulating Greek Parliament Committees in an attempt to reveal the whistleblowers’ identities, it is clear that the dominant political order in Greece, does not wish for the protection of whistleblowers, to be able to say what the know without fear for their lives and safety. For months, we watched the government struggle to agree on the legislation to transpose the European Directive on whistleblowers, having already received a letter of formal notice from the European Commission! In essence, having already taken too long on this matter, instead of trying to catch up, the Greek government is trying to run out the clock.

AK: Novartis, in its settlement with the U.S. Department of Justice (DOJ), acknowledged making illegal payments to Greek officials and healthcare providers. Could you please share your insights about the three billion euro scandal?

KA: The Novartis case is an international corruption scandal. Greece is among the countries where owing to a special position in the pharmaceutical products pricing system, government officials were objectively involved. The Mitsotakis government is refusing to make use of the FBI investigation results and has, from the start, been trying to frame the Novartis scandal in Greece, as involving solely medical professionals. But that was not enough: From the first moment, the message to Justice was clear: “Hands off our own.” With a series of unconstitutional public interventions exhorting jurists to adopt specific views, at times coming from the Prime Minister himself, the acquittal of all political personnel was constantly telegraphed, as well as by a mounting number of government interventions in the judiciary. The indictment of those politicians for whom the FBI investigation showed was involved with the scandal, which should have been a given, was dubbed a “scheme,” and, by way of a series of manipulations, both the corrupt prosecutor handling the case and the journalists who substantially aided the investigations of the scandal found themselves facing charges. The Mitsotakis government, in the case of the Novartis scandal, had a plan, and worked towards a double goal: On the one hand, trying to frame the scandal’s political part as a scheme by its political opponents, and on the other hand to keep the pressure on those who contributed to the revelations and judicial investigation. Hence, the misadventures of Prosecutor Touloupaki, journalists Vaxevanis and Papadakou, as well as the ruthless “hunt” for the whistleblowers. Tellingly, at the same time, the Greek government is preoccupied with engineering the persecution of its political opponents, and while it recognizes that the Novartis case is a scandal (even if it only concerned doctors…), it displays a stunning nonchalance regarding compensation claims, in contrast with other countries. In other words, in the matter of the Novartis scandal, the Greek government is seriously wounding the Rule of Law, and openly insulting our intelligence.

Tags: Corruption is on the rise in the European UnionEurope-InterviewEuropean-SecurityMain-SliderOpinion section