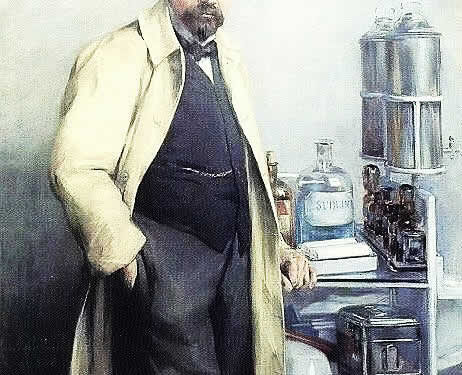 Belgium (Brussels Morning Newspaper)Antoine Depage and Woodrow Wilson never met face to face. Yet, a series of world events in 1915 collided in such a way as to affect each man profoundly but in very different ways. For Antoine, the events were very personal while for Woodrow, those very same events compelled him in a such manner as to alter the trajectory of world history. What follows is the story of those two men, those three events and how they unfolded against a very Belgian backdrop…. Belgian Royal surgeon Antoine Depage (1862-1925) is most remembered for his work in establishing the Belgian Red Cross. During World War I, he put into place a first- of- a- kind military hospital, battlefield triage units, clinics and university teaching hospitals. In an effort to provde funding for these projects, his wife Marie Depage, proved invaluable. In the spring of 1915, she traveled to the U.S.A. and was able to raise more than $100,000 (equivalent to $2.9 million today) in aid. Marie booked her return passage on the British passenger ship The Lusitania. On May 7th 1915, a German U-boat torpedoed The Lusitania killing 1,198 passengers and crew Tragically Marie Depage was one of those passengers. Ultimately, her body was recovered with Belgian sovereigns King Albert I and Queen Elizabeth attending her funeral shortly thereafter. Widower Antoine, devastated to be sure, would carry on his work—-but this was only the opening round of his 1915 nightmare.

In late August of that same year, German troops pulverized (literally) Louvain, Belgian—a city long considered the intellectual capital of the Low Countries. The church was firebombed, markets were destroyed, the university library (founded in 1425) was razed along with 245 deaths and 2,000 imprisoned. Over 200 buildings were destroyed including some of Antoine Depage’s hospital and medical school prototypes. Large amounts of medicine, surgical equipment, foodstuffs, strategic hospital supplies (e.g., beds, linens, bandages), and related items were looted and transferred to Germany. Antoine’s dedication to wartime health care never wavered but his ability to practice was severely challenged.

In October of this frightful year, Antoine’s personal nightmare continued. Depage’s chief assistant and Red Cross co-founder Edith Cavell, was executed by a German firing squad. The incident got massive international attention and would serve as a symbol of Allied propaganda. At the time of her execution, Edith Cavell was already recognized as “pioneer of modern nursing in Belgium.” She was a force of nature: she established multiple nursing schools throughout Belgium, published professional health journals (e.g., L’Infirmiére—still in publication!), and brought public health to the attention of the Belgium school system. Edith was executed for her humanity in treating French, Belgian, English, and German wounded soldiers. Her heroic “non-denial” of the charge of “harboring the enemy”, effectively signed her own death warrant. To this day, worldwide memorials, nursing schools, hospitals, and scholarships memorialize her name.

Across the ocean, those very same events of 1915 impacted President Woodrow Wilson but in different ways. Wilson, the 28th president of the United States, came into office in 1913 as a candidate dedicated to keeping America out of the gathering nightmare of World War I. Wilson profoundly believed that America’s role was one of a “peacemaker and a model neutral mediator”. (His words). However, the sinking of The Lusitania gave voice to Wilson’s political opponents who favored America’s participation in WW I. These critical voices would only become louder…

As an academic and former president of Princeton University, the burning of University of Louvain was particularly odious to Wilson. Although his public statements were minimal, Wilson’s biographers have chronicled that the book burning and destruction of ancient texts housed in Louvain’s library, opened his eyes to the savagery of the German occupation of Belgium. Wilson labeled Louvain’s fate as Belgium’s “Valley of Suffering” as he began to second guess his vision of America’s role as a neutral observer and peace maker.

compounded Wilson’s awareness of Germany’s brutality but eroded his confidence that his neutral vision for America was sustainable. He began to wonder out loud how a seemingly “civilized” Western European nation (read: Germany) with many contributions to European culture, could resort to such callous malevolence. The Ambassador to Belgium, Hugh S. Gibson, wrote that collectively the sinking of The Lusitania, the burning of Louvain and the University (known as The Rape of Belgium) and the execution of Edith Cavell would; “stir all civilized countries with horror and disgust towards the aims of German aggression.”

Heroically the recently widowed and traumatized Antoine Depage, would endure. Like the Biblical story of Job, Antoine channeled his grief and all of his energies into continued service to Belgium’s war effort. He was unwavering in his commitment to the development of Belgium’s treatment of the war wounded. His triage/ ambulance/surgery methodology remains the gold standard for treating the battlefield wounded even today. Depage’s legacy, the Belgian Red Cross, is considered a leading player in the field of humanitarian action both in country and internationally.

Those very same events that affected Antoine Depage on a personal level, transformed President Wilson’s basic vision as America as a model of neutrality. Wilson was able “course correct” America’s foreign policy from isolation to internationalism and by doing so, bring World War I to an end. This was no small feat. He would be rewarded with the Nobel Peace prize in 1919 for his efforts. Wilson’s transformation, for better or for worse, shaped much of America’s foreign policy for the remainder of the 20th Century.

Tags: Antoine and WoodrowMain-SliderOpinion section
No Result
View All Result