Ukraine reportedly pressures OTP bank to pull out of Russia 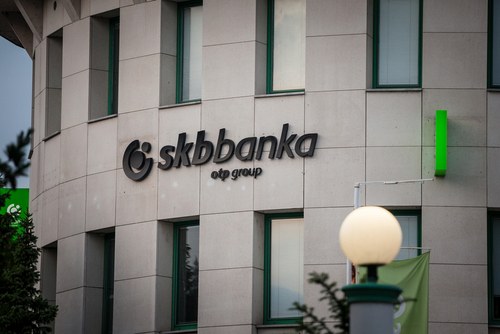 LJUBLJANA, SLOVENIA - JUNE 12, 2021: SKB Banka logo on their Ljbljana office. SKB group banka, part of OTP group is a Slovenian retail and commercial bank, one of the financial leaders of the country

Belgium, (Brussels Morning Newspaper) Hungarian OTP bank noted on Wednesday that it is under pressure from Ukraine to pull out of Russia.

OTP CEO Sándor Csányi stressed that the Ukrainian government is pressuring the bank to sell its Russian subsidiary, according to Reuters reporting on Thursday.

Csányi previously announced that OTP would sell its business in Russia if it finds a buyer, pointing out that staying on the Russian market could become a moral issue.

OTP is present in both Ukraine and Russia, and the two subsidiaries accounted for roughly 15.8% of the bank’s profit last year.

The bank stressed that it is tapering corporate lending in Russia in line with Western sanctions and analysing withdrawal options.

“We are under enormous pressure over Russia to sell our bank there or shut down our operation like many Western European companies have done,” Csányi stressed in an interview with InfoRádió.

He added that the bank is not facing similar pressure in Hungary and noted “we are mainly cautioned by the Ukrainian government on a regular basis, by leaders of various rankings.”

Csányi pointed out that OTP’s unit in Russia is large, which makes it “very hard” to sell it, and noted that the bank would “strongly consider” leaving the Russian market if it receives a desirable offer. He added that OTP’s Russian subsidiary is worth approximately 500 million euro.

“When I say desirable I mean a not too onerous loss,” he expanded and continued “but I would rather not give any tips to anyone on what is acceptable for us.”

Commenting on the Russian economy, he noted that its prospects are “not very bright.”

Csányi added that Ukraine is preparing regulations that would impose higher taxes on companies that operate in Russia, stressing that OTP has to take this into account.

“We are not making decisions only because we are under pressure… we will wait for the appropriate moment,” he pointed out and concluded “we can stay put for years, if needed, but we are also prepared to sell [the Russian subsidiary] in a week.”

Hungary has strengthened economic cooperation with Russia under Prime Minister Viktor Orbán, who voiced his opposition to the proposed embargo on Russian natural gas and oil.