Dewinter and Wilders make another attempt to visit Molenbeek 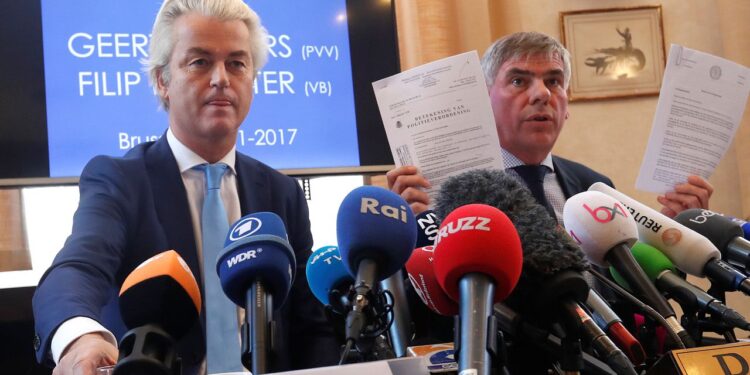 Vlaams Belang leader Filip Dewinter and the Dutch PVV leader Geert Wilders want to visit Molenbeek in Brussels on Friday 13 May. According to Dewinter, the visit comes as a result of the statements of Vooruit chairman Conner Rousseau, who is also immediately invited to come along.

Dewinter and Wilders already planned in 2017 to undertake an “Islam safari”, as they called it at the time, in Molenbeek to determine on the spot how the Brussels municipality was affected by “Islamization and mass migration”. However, then mayor Françoise Schepmans (MR) banned the action. The initiators did go to the Council of State, which eventually overturned the ban in 2021.

“Due to the corona crisis, the walk has not yet started, but we have now submitted a new application for May 13,” says Dewinter. “We want to make a statement that we cannot give up Islamized places in our country. But it is not a demonstration, we are not going to stir things up and we are not calling on anyone to come with us.”

According to BRUZZ , the plan comes as a result of Conner Rousseau’s interview with Humo. In it, the Vooruit chairman stated, among other things, that he “does not feel in Belgium” when he drives through Molenbeek.

“If even Conner Rousseau starts to come to the same conclusions that we have been making for a long time…”, says Dewinter. “Molenbeek is indeed a symbol of all municipalities that are completely alienated and Islamized and that we have to ‘reconquer’.” Dewinter says that he also invites Rousseau to go out with him and Wilders.

The municipality of Molenbeek will examine Dewinter and Wilders’ application through the procedure provided for that purpose, Molenbeek’s mayor Catherine Moureaux (PS) assures. However, the chance that an admission will actually be granted is small. “I have a very hard time with the far right. I don’t argue with it and they can’t hold 100,000 residents hostage with disgusting ideas, hatred and racism. That will not be tolerated. We will review their application and treat it properly, but I completely distance myself from the far right Moureaux emphasises.