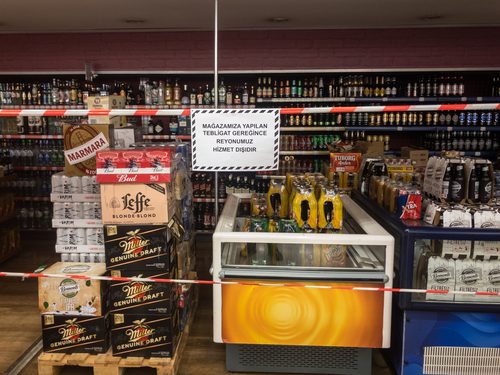 Istanbul (Brussels Morning) It’s well-known that the government of Turkey is not in favour of liquor, implementing a rigid alcohol ban in 2013, curtailing advertisements and lacing restrictions on liquor selling hours. Up until the start of the pandemic, the government continued to raise tax rates on liquor while blocking the license processes of liquor stores and restaurants serving alcohol. However, the pandemic and rising case numbers were a great opportunity for the government to implement even more measures.

The Ministry of Interior issued a decree and announced a curfew and ban on liquor sales on weekends in November 2020. The justification for the ban was that liquor was a non-essential good and it made social distancing more challenging. People were skeptical about the justification, finding it hard to fathom how liquor effected the ability to social distance while they were sitting in their homes under curfew. This question was asked by many, yet the government succeeded to implement the ban until recently.

Several months following the first ban, the pandemic peaked for the second time in Turkey and the government announced another full lockdown for 17 days between 30 April and 17 May 2021. While full lock-down measures were in place, news had been circulating on social media that liquor stores would face closures because they were not under an exemption. However, in the Circular Letter on Total Closure Measures sent by the Ministry of Internal Affairs to all provincial governorships, there were no restrictions mentioned on liquor sales within the scope of lock-down measures, which meant there was no legal basis for the liquor ban.

The government tried to put a ban on liquor without any legal ground or logic. Together with heavy taxes and measures imposed on alcoholic products in recent years, the government’s failure to answer why a full-scale ban on alcohol would effectively combat the pandemic caused a justified concern on whether the government’s rather restrictive alcohol policy would constitute a “lifestyle intervention” in the public opinion.

At that point, legal experts, journalists, NGOs, liquor store owners, alcohol companies and social media users criticised and failed to obey the government’s de facto alcohol ban. They invited the government to abide by Article 13 (principle of proportionality) of the Turkish Constitution and Article 18 of the EIHC and to stop implementing a blanket de facto ban on a fundamental freedom.

Turkish Public Alcohol Policy Watch conducted a large-scale digital campaign against the ban and invited people to boycott it. The campaign reached more than 4 million people on social media and was covered by many TV channels and newspapers. When political parties were too afraid to raise concerns against the liquor ban in a mostly conservative society, a civil initiative successfully conducted a digital campaign and the government stepped back. In the first week of the full lockdown liquor sales were possible.

The government continued to its endeavors to find a new way of putting another ban on liquors but they couldn’t succeed until 7 May. The government issued a new degree and put a new ban to all non-essential good sales on 7 May. The justification for the new ban is to prevent unfair competition and intensity in supermarkets. Nonetheless, we all know this is just another excuse for them to continue to constitute the liquor sales ban.

The only consolidation at this point was that the government had to remember to rule by law. Putting a ban on a fundamental freedom without a legal base is unacceptable even for Turkish standards. The government had to create a legal ground for the ban and couldn’t separate liquors from other non-essential goods thanks to people who fought for their freedoms. After 17 May, the liquor sales will be possible again like all other non-essential goods, but it seems the government was determined to restrict liquor sales so this struggle will continue for a long time.