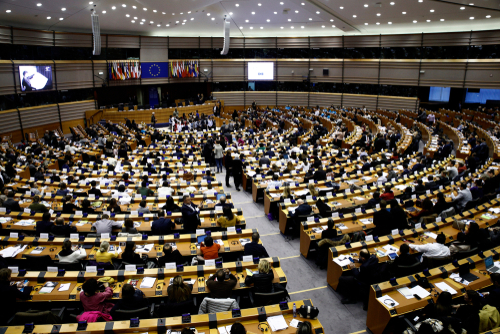 Brussels (Brussels Morning): The 6 January arrests of Hong Kong pro-democracy activists prompted a debate in the European Parliament’s first plenary of the year. While calling for the unconditional release of all those detained in the first weeks of the year, the Parliament’s resolution urges the immediate freeing of Joshua Wong, Ivan Lam and Agnes Chow, who were sentenced in December for the 2019 protests, as well as other pro-democracy activists apprehended last year.

“We have been talking of one country, two systems, but that is in danger now”, Italian MEP Marco Campomenosi (Lega Nord) declared, opening the debate on behalf the Parliament’s Committee on International Trade. “Political activists have been deprived of their liberty after the National Security Law came into force. That endangers the autonomy of Hong Kong. The agreement with the UK when Hong Kong was returned to China guaranteed it autonomy.”

MEPs were taken by surprise when Commission and Council President Charles Michel announced during the holiday season that the EU-China investment agreement had been concluded. The debate on its adoption is expected to be heated and fierce, given that a majority of the parliamentarians were taken aback by the weak language on human rights contained in the draft proposal. .

“We have learnt that the Communist party is fearful of freedom, even in such a small territory as Hong Kong”, Nathalie Loiseau (Liberals’ Renew Europe group).declared. To illustrate the party’s fear of transparency, she French MEP pointed to the protracted and difficult negotiations the WHO undertaken in order to investigate the origins of COVID. She also cited China’s continuing denial of what she described as “the atrocious conditions under which the Uyghur population lives”,.

So far, the Parliament has been keen to signal that it intends to hold China to account over its human rights record in the context of the EU investment agreement.

“It is becoming ever clearer that China is using the draconian new security law to muzzle the democratic opposition in Hong Kong”, Dutch MEP Bert-Jan Ruissen said, speaking for the Conservatives’ ECR group. “And they are seriously restricting the rights and freedoms of the Hong Kongers with reference to subversive behaviour.”

The majority of MEPs speaking in yesterday’s debate called on the EU to adopt a strong position on the issue. They insisted that it should not accept the rather vague promises made by China in the investment agreement, by which Beijing commits to exploring options for the ratification of core ILO conventions against the use of forced labour.

Chinese prisoners are made to work both in labour camps and under prison-like conditions in detention centres which deploy them in manufacturing. According to the EP’s resolution, the country’s human rights record is at its lowest in a decade, especially because of the repression of ethnic minorities, in particular the Tibetans and the Uyghurs.

For the Socialist group, German MEP Evelyne Gebhardt pointed out to the widespread repression of the Chinese people by their own authorities. “They have been using the international situation to introduce censorship and incarcerate innocent people”, she  exclaimed. “The National Security Law needs to be withdrawn and all unfairly imprisoned opposition leaders in Hong Kong released immediately.”

Most of all, the Parliament wants the European foreign affairs ministers, convening next Monday, to make use of the new human rights sanctions regime to pressure China on Hong Kong.

“With increasing human rights violations in China, rushing into an agreement on investment as the Council did could harm our reputation as a human rights actor”, Spanish MEP Jordi Solé said, speaking for the Greens.

For the Conservatives’ EPP, Irish MEP Sean Kelly recounted how the authorities had seized the individual assets of political opponents, some through European banks in Hong Kong. “Censorship is taking place online, as democracy websites are blocked and access to information is denied with damaging consequences”, he added. “The introduction of the National Security Law by the Beijing government is an attack on the city of Hong Kong, the rule of law and on fundamental freedoms. It degrades the integrity of one country, two systems.“

End to business as usual?

The National Security Law, which China uses to violate the terms of the UK’s return of Hong Kong to China in 1997, was adopted last summer. It has since been used to institute censorship, notably in bring about the arrest of pro-democracy, media mogul Jimmy Lai in August. It was invoked to defer  the elections planned for last September.

“Joshua Wong is in prison together with 53 democracy activists on the basis of this draconian law. We need to ask for them to be freed, but the Chinese government has responded with repression”, Fabio Massimo Castaldo from the Italian Five-Star party asseerted. “This is the fight of everybody who wishes to see human rights and democracy prevail worldwide.”

French MEP Bernard Guetta, speaking for the Liberals, stated that it is “a political duty is to say to China’s president Xi that this agreement will not be ratified before his regime has ratified commitments on labour standards”.

French MEP Yannick Jadot with the Greens echoed the comments, declaring business as usual could continue no longer with China. “The Parliament has to criticise and denounce the investment agreement. It is a political error and negotiations should be suspended”, he said.

Responding to those who indicated that the statement by  EU Foreign Policy head Josep Borrell, should been clearer, Commissioner Helena Dalli offered some assurances to the plenary session. ”The EU-China leaders’ meeting in December was not only the occasion to conclude negotiations in principle on a comprehensive agreement on investment with China, but also to raise the concerns over Hong Kong”, she said.

Hong Kong is on the agenda of the EU foreign ministers’ videoconference meeting on Monday.