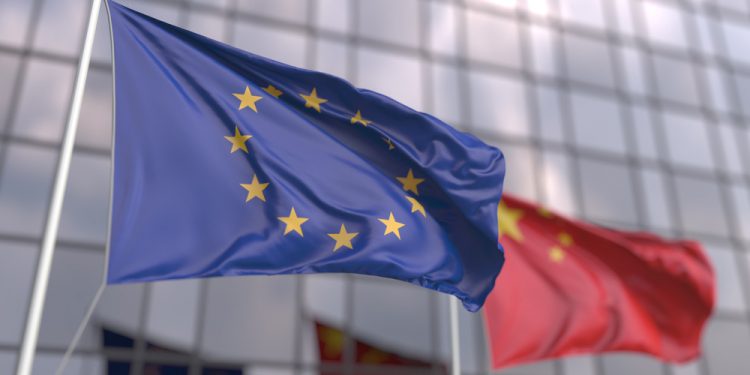 Waving flags of the European Union EU and China in front of a modern skyscraper facade.

Brussels (Brussels Morning) The fallout ensuing from the investment treaty agreed in the online meeting between China’s President Xi Jinping and European Council President Charles Michel before New Year bodes ill for the adoption of the deal through proceedings in both Brussels and EU member state capitals this year.

The lure of China’s growing domestic market and the business opportunities it entails led the EU to conclude an agreement that dealt China a major political victory.

”The main issue from the Chinese side is that they don’t want to be seen as pushing the deal. Instead, they want everybody to think that the EU was pushing the deal,” explains Alicia Garcia-Herrero, senior research fellow at Bruegel, a Brussels-based think tank. ”But from the EU-China summit in September, it was clear China was pushing for it.”

Last week’s final agreement came about as a result of seven years of negotiations, which the European Commission initiated, based on the previous partnership agreement with China.

”At the time, the EU wanted the deal,” Garcia-Herrero says, speaking from Hong Kong.  ”So I am not claiming that Europe did not push.” Yet, she maintains, it was the Chinese government that insisted on bringing the talks to an end. ”It just shows that China does not want the US to think they are pushing people around. One thing is that China wants it to be seen as if everybody does approach China first.”

When news of the final agreement was released last Wednesday after the meeting between President Xi and Council President Michel, it was to announce that an understanding had been concluded in principle. Once the announcement had sunk in with the return to virtual office spaces this week, it became apparent that details of the deal had not been shared beforehand, not even with EU member state governments. Experts involved had only seen a draft text.

A close reading of the Commission’s statement so far gives reason for pessimism. ”They don’t say what they did not get,” Garcia-Herrero argues, citing the draft agreement in support of her contention that the bar was lowered on the European side. ”The thinking seems to be that this was a temporary agreement that will be reviewed but they won’t concede that the objectives were impossible.”

From the EU’s perspective, the deal was about improved market access for European companies operating in China or intending to launch operations there. A long-term China analyst, Garcia-Herrero, disagrees that the agreement fulfilled the EU’s thresholds set for achieving a level playing field, a trade policy term that requires states not to favour domestic companies unduly, while also requiring reciprocal treatment for foreign companies.

”If we start with the hardest, reciprocity, China’s market remains much more closed to EU companies than the EU market is for Chinese companies,” she says.

Also the intent to level the playing field by addressing the issue of subsidies that disadvantage European companies operating in China has amounted to little more than lip service since subsidies in the manufacturing sector still won’t be scrutinised under terms of the deal. The agreement applies solely to China’s subsidies in the services sector and even there, the enforcement mechanism is weak since the treaty’s provision for state-to-state dispute settlement does not apply to the issue of subsidies.

As for market access, only a few limited concessions were made for EU businesses in specific sectors such as electric vehicles, telecommunications and private hospitals.

Bilateral concessions by China apply only to new investments in electric vehicle production, not to existing manufacturing capacity of non-electric vehicles and then only in cases where there is no excess capacity, whereas at present there is excess supply. In the telecommunications sector, which is key to the EU’s demands for greater market access, EU investment remains capped at below 50%.

Gains in the healthcare sector allow for private hospital investments but only in some Chinese cities, subject to demand and ultimately still under licensing.

A unique deal or a pyrrhic victory?

When the Commission took up work this week, albeit mostly on remote, spokespersons were quick to defend the agreement, when queried by reporters.

”We have negotiated something that China has never agreed with other partners,” Miriam Garcia Ferrer, Commission spokesperson on trade, stated on Wednesday. ”There is a mechanism for political oversight agreed between Commissioner Dombrovskis and the Chinese Vice-President. We are confident that any differences could be settled in this manner. And there is another mechanism before an expert panel if China does not respect the treaty.”

The clauses on dispute resolution were key demands from the EU’s side. The investment deal was urged on by Germany’s Chancellor Angela Merkel at the finish of the German EU presidency. China’s market is considerably less open than the EU’s, with foreign investors’ access to a number of sectors restricted or prohibited. European companies operating in China do not benefit from the same levels of transparency and fair competition as those enjoyed by Chinese companies in the EU market.

”You create fuss but it is a pyrrhic victory,” Alicia Garcia-Herrera says in reference to some of the deal’s clauses, notably in the services market. Seemingly, these cannot be implemented because they would depend on the multilateral dispute settlement under the WTO that manifestly cannot cover such claims. ”What China wants is that nothing should change. China does not want to be stopped in the European market because of unfair competition.”

A major emerging issue surrounding the investment treaty is the weak wording on China’s refusal to ratify International Labour Organisation conventions banning forced labour. This is likely to be intensely debated once the text has been finalised and dealt with both by individual EU member states and by the European Parliament.

Garcia-Herrera ponders why the complex deal was rushed through at this point. On the one hand, it was a political signal to the US and the incumbent administration that the EU will not be waiting around any longer. ”To many it may seem as if the EU has nothing to lose, as its concessions to China appear minimal,” she suggests, noting that the deal seeks to evoke the EU’s ability to protect its own market from unfair competition.